Skip to content
February 28, 2015 in Cosmos See more stories from this title 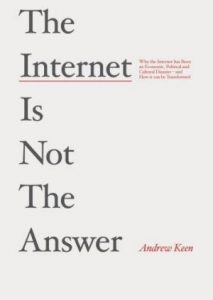 Everyone from Instagramming kids to governments of the world love digital technologies and the economies they enable. But if you’ve ever thought the rhetoric about how fantastic the internet is sounds a little too hysterically and unquestioningly cult-like, The Internet is Not the Answer is for you.

Andrew Keen enjoys unparalleled access to some of the best and brightest in Silicon Valley and the tech world beyond thanks to his work as an industry commentator, and every time he talks to another billionaire wunderkind throwing terms like ‘disruptive’, ‘game-changing’ and ‘level playing field’ around, you’ll believe it a little bit less right along with him.

One of his most insightful assertions is that the Zuckerbergs and Brins/Pages (Google) of the world are no different from the Rockefellers and Rothschilds of other eras despite all their talk about smashing the old systems.

Technology throws millions out of work and decimates entire communities (like Rochester, New York, the former home of Kodak which features heavily in the book) the same way it always has. The only difference, Keen observes, is that today the people behind it wear hoodies and sneakers instead of Saville Row suits.

In fact, the gap between the haves and have nots has become bigger than ever thanks to the speed and ferocity of markets reacting to these globe-changing trends.

After the promises of evangelical digital prophets like Chris Anderson (of the Long Tail thesis) and Kevin Kelly, Keen writes; ‘rather than democracy and diversity, all we’ve got from the digital revolution so far is fewer jobs, an overabundance of content, an infestation of piracy, a coterie of Internet monopolists, and a radical narrowing of our economic and cultural elite.’

And if you did work at Kodak, a record company or the New York Times (companies and fields Keen quite rightly claims have been gutted rather than ‘revolutionised’ like we were promised), new business models making more money for less people only adds insult to injury.

While we endlessly tweet, post and search online companies like Google, Amazon and Facebook are collecting everything there is to know about us, and that’s what they’re getting rich off in today’s personal-information-as-currency economy. Essentially we’re working for them… for free.

It’s too late to go back, and few in the Western World would want to now the Internet is as essential as electricity. But The Internet is Not the Answer will remind you not to drink the digital Kool-Aid so readily.