Skip to content
March 15, 2010 in Popular Science See more stories from this title 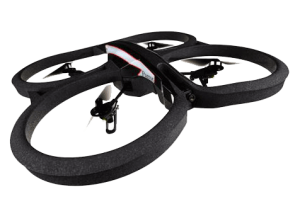 Miniature remote controlled aircraft are nothing new, so just what makes the Parrot AR Drone so cool? Maybe it’s the futuristic design. It’s not just a helicopter, it’s a quadcopter, looking more like a cross between a high tech US military drone and something out of the Transformers sequel.

Maybe it’s the maneuverability — no more trekking to windswept fields on rainy weekend mornings to fly in the open air so you don’t destroy your craft (or something else). Videos on the web show the AR Drone being flown as slowly as you can imagine, so you can pilot it around the park or around your house, flying it through doors and windows with startling precision. Even if you’re a little unsure, a removable foam hull will protect it (or the pot plants) against errant bumps.

No, it turns out the coolest thing is flying it using your iPod Touch or iPhone. A camera in the body points at the ground to keep an eye on your altitude, calculating the inertia needed to keep it aloft no matter what speed it’s going. The second, front mounted camera gives you a pilots-eye view of the path ahead. You simply tune your iPhone or iPod into the Wi-Fi network the Drone generates and it streams what it’s seeing right into your hand. Unlike the hobbyists who need to keep a close eye on their plane in the sky, you can fly the AR Drone all over the neighbourhood as long as you’re within range of the Wi-Fi signal (if it drops out, the AR Drone makes a soft automated landing).

But it’s not just the large clear picture of your flight path the iPhone or iPod Touch can provide. Instead of struggling with a complicated remote control unit, you fly the AR Drone merely by tilting your handheld device in the direction you want to go. There are a few basic touchscreen controls like rise, down and rotate, but the accelerometers inside do the rest.

Augmented reality games like dogfights with other Drones are all part of the experience, but as the crowds at 2010’s Consumer Electronics Show in La Vegas learned, it’s just as much fun to simply fly it around. There’s no word on Australian availability or pricing yet but keep checking at http://ardrone.parrot.com/parrot-ar-drone/en/