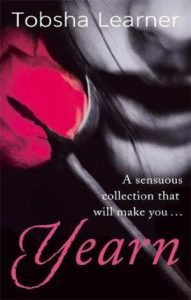 The West was a little nervous talking to Tobsha Learner over the phone from her London home, and it wasn’t just because she’d just moved house and might be stressed out and not in the mood to do publicity for her works. It was because of one little word — ‘erotica’.

“And I have no bias or judgement either way but I just don’t write pornography. It stays with you and it’s more tantalising if it’s coming out of a story or character or a relationship between two people. Many of the issues I cover are to do with class, tragedy, bereavement, lots of things.”

The most interesting thing to learn about Learner’s work is that she’s always considered that she writes from a male viewpoint, perhaps explaining her wide readership not just in age but gender. “I know quite a lot of male readers like to read the stories to their girl friends,” she laughs. “It’s used as a bit of a metrosexual draw card. If you have it on your shelf you’ll be intriguing to a woman.” Learner also sits down to write without a specific age group or gender in mind, something she thinks broadens her appeal further.

Her mastery of the senses in the environment of her stories gives away something of her background in both sculpture and theatre (‘I’ve always been very interested in gesture and the space between characters,” she says), using the word ‘visceral’ more than once. “As a reader I like to move through a landscape and have a very full experience of it. So as an author I try to achieve that for my readers and it includes taste, touch, scent, the space between people and their emotions.”

The most exciting development in Learner’s career lately is becoming the subject of a bold experiment on behalf of her publisher. Recently The West reported on the release of her stories as one-off digital downloads, described by HarperCollins publishing director Shona Martyn as being the perfect length to read during a train ride or in a doctor’s waiting room.

It’d be a prophetic writer indeed who decided to make their name in short stories in anticipation of the short download iPad age, but Learner calls short fiction ‘the future’ and she’s fully embraced the digital age. “I’ve actually discovered audio files and I love reading the first ten pages in my own voice. I think it’s quite sexy to have the reader able to download the audio file and hear that,” she says. “I love it because I’ve worked in radio as well and I love the motion of sound and language.

Learner’s also one of those rare talents that’s met with success in both the long and short form, and when we point out the stories in Yearn are longer than those in Tremble, she says she didn’t even realise. “Each one has a natural length,” she explains, “when it comes to long narratives they tell themselves to some degree because there has to be some kind of resolution and poignancy. In a short story you can leave it hanging and leave the resolution a little bit more with the reader.”

Given the choice, Learner also says the finds the shorter form her favourite. “I find them much, much easier to write than the long narratives,” she says. The one I’m working on at the moment is going to be another 450 pages and there’s an immense amount of historical research. Short stories are much less intense and grueling, much more delightful to write.”