Skip to content
September 1, 2009 in Men's Style See more stories from this title 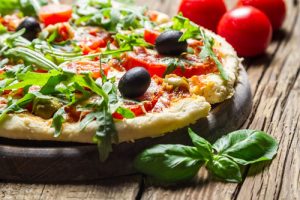 Perth is the last place you’d expect to find the best pizza in the world, but Men’s Style found it, enjoying two delicious examples of owner and chef Raffaele Brotzu’s handiwork at the tiny Delizioso café in upmarket Subiaco.

While we tuck into a kangaroo, truffle-infused pecorino and rocket and a Taleggio cheese, rock melon and Italian prosciutto pizza, Brotzu explained how making the best pizza in the world is possible in an outpost like Perth that’s so distant from everywhere else.

“We’re getting better because you can import produce like San Daniele prosciutto, which is one of the best prosciutto in Italy,” he says. “Today we can get fresh product quicker and we’re also travelling a lot more from Western Australia so we’re going to Italy and trying new stuff.”

Brotzu takes his artistry seriously and the award is a serious honour. Drunk revellers from the nearby Subiaco Hotel and beer-swilling DVD nights are not Delizoso’s target market. After nabbing the Dairy Farmers WA championship in 2005, 06 and 07, Delizosio went on to win the national competition in 2007 and in 2008, the title of world’s best pizza after competing in the International Pizza Expo, held every year in Las Vegas and organised by the official sounding National Association of Pizzeria Operators.

Though easy to scoff that it’s only in America you’d find an industry lobby group for pizza chefs and pizzeria owners, awards from the Pizza Expo are world-renowned and not to be sniffed at.

“Proud,” Brotzu says to describe how the achievement makes him feel. “It’s been a big effort because to get to that stage you need to win the State and National title. They fly you there for this big ceremony in Las Vegas, it’s the biggest pizza show in the world. I’ve been trying for it for three years and the advantage of the competition is that you try to push that extra bit and try something different all the time. At the end of the day that’s making you evolve, your product, your personality, your branding and everything. If you put lots of effort into a good product and you’re advertising and marketing properly you’re going to succeed.”

So while words like ‘branding’ and ‘marketing’ might seem high and mighty for a mere pizzeria, it’s a philosophy Brotzu feels has worked for him, and while Men’s Style enjoys what surely is the world’s best pizza, we find it hard to disagree.