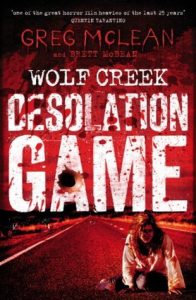 In today’s multimedia world where so many artistic forms are not just available but enjoy huge mainstream acceptance, it’s all about the mythology.

Fictional universes like those of Star Wars, Lord of the Rings and Harry Potter have such large numbers of characters, places, histories and lore all their own they’ve taken the word ‘mythology’ on for themselves, and with good reason. They’re our new cultural myths, like the stories of Heracles, Poseidon and Vishnu were to the ancients.

But where those ancient societies had stone carvings, campfire storytelling and papyrus, today we have everything from the book and movie to the video game, web series, graphic novel, TV series and even fan fiction.

Some entertainment properties don’t immediately seem suited to such cross-media treatment. 2005’s breakout Australian hit Wolf Creek – about a nasty outback serial killer preying on tourists – was so stripped down and lean it seemed to be the final word on villain Mick Taylor (John Jarratt). We know from the infamous ‘head on a stick’ sequence that he’s a Vietnam veteran, and little else.

“I always had a idea of what his story was,” says writer/director Greg Mclean. “Over the years I just began noting it down until I realised I had an entire saga written down with chapters, events and characters.”

Mclean’s continued interest in what drives Mick has resulted in the kind of expanded universe normally reserved for civil space wars or schools for wizards mentioned above. But February will see the release of Wolf Creek 2, where Mick menaces a new crop of backpackers, and before that you’ll be able to read about his formative years in two books – Wolf Creek: Origin and Wolf Creek: Desolation Game, which Mclean co-wrote with Aaron Sterns and Brett McBean respectively.

“Ideally there’ll be more movies and that’s one storyline, which Wolf Creek 2 is part of,” Mclean says. “The novels tell the story of Mick Taylor and expands the Wolf Creek universe up to the point of events in the first film.”

Mclean adds that he’s always had the outline of Mick’s story in his head and plotted the whole pre-Wolf Creek story out about three years back. He recruited his Wolf Creek 2 co-writer Sterns to complete Origin, and Sterns recommended McBean to Mclean after reading his work for Desolation Game. “They’re both extremely professional and creative so they were a pleasure to create with,” Mclean says of both collaborations.

With four more books planned if Origin and Desolation Game do well, Mclean says he’s very interested in the opportunities and challenges of taking the Wolf Creek story to new media. “At the core of anything that works across multiple platforms is a very engaging character or story world people enjoy,” he says. “The new movie and novels will really test the appetite out there for more Wolf Creek. I know for a fact horror fans are big readers, game players and have a huge online presence, so the audience is there and it’s really up to the creators to make work of the highest possible quality. That’s the challenge.”

Working on novels rather than movies is also a new experience for the 44-year-old, but one he appreciates the nuances of. In film, he says, the director is the author of the cinematic language even though supported by many other inputs from other craftspeople. “In a novel, the writer is the director, cinematographer, designer, sound designer, costume designer – everything. They create the entire world with words.”

So with the promise of more films and books about one of cinema’s nastiest characters, the only question left is this. The 2005 movie – while extremely well made, visceral and immersive – is very hard to watch, a quality few horror films actually achieve. Why do we want to see more of Mick Taylor?

Mclean thinks we’re naturally fascinated by evil, something you can see in the success of the true crime genre. “We’re especially curious about people in the ‘normal’ world we all inhabit but who are criminal or evil minded. True crime’s a way to peer into the motivations and souls of people who commit unthinkable crimes.

“There’s nothing new about the phenomenon given the world’s most popular author of all time is Agatha Christie, who published 66 murder mysteries. I also think Mick may have a special appeal to Aussies because we recognise him as a genuinely plausible character – most Australians know someone a little bit like him, so it makes the stories all the more relatable.”

And because all we know of Mick is that he’s a war veteran, is Wolf Creek Mclean’s Night of the Living Dead – the classic George Romero zombie movie most people accept as a Vietnam parable?

He says that even though war plays a major part of Mick’s development in Desolation Game (although not in the way we’ll expect), there’s no implicit war subtext in the Wolf Creek universe. But the director admits it’s a complex question. “Most serial killers come from relatively ‘normal’ circumstances, or heavily disturbed circumstances that clearly contributed heavily to their later behaviour,” he says. “But most serial killers of major infamy have no experience of war.”

It’s also nearly a decade since Wolf Creek scared up such amazing business across the world – to the extent Hollywood heavyweights The Weinstein Company gave Mclean $25m for his next movie, giant crocodile monster movie Rogue. What would he tell his 34-year-old self, working away on Wolf Creek in country Victoria and the Wolfe Creek meteorite crater near Halls Creek in WA, if he could?

“Take every opportunity as it comes along,” he says. “It sometimes takes a long time to recognise what an opportunity looks like and I’ve let some doozies slip by.”

But he’s understandably proud of what Wolf Creek achieved. “Very few filmmakers are lucky enough to create a movie that touches a chord around the world and Wolf Creek has certainly become something of a cult movie,” he says. “I’m very proud of that, and it’s even rarer that the original creator can make more movies or books and control the property the way I’m able to. It’s really satisfying because you can really define how high you want to aim and it can’t be compromised.”

Meanwhile, Mclean and his collaborators look forward to turning Mick Taylor into one of the truly iconic modern villains by moving the character from one platform to another. In generations to come, might he be Australia’s answer to Dracula, Darth Vader and Fred Krueger all rolled into one? Time – along with Taylor’s savagery and Mclean’s multimedia aspirations – will tell.