Skip to content
October 13, 2014 in Moviehole See more stories from this title 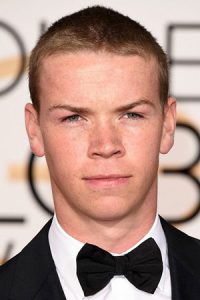 With his sternly arched eyebrows and prominent brow, actor Will Poulter has a very distinctive look you’ll remember from one of the tearaway young stars of Son of Rambow (2007) and the Chronicles of Narnia: The Voyage of the Dawn Treader (2010).

Now 21 and with 2013 comedy We’re The Millers behind him and great things coming up, the soft-spoken Brit is a few minutes late sitting down to talk, apologising because he’s had to rush to the men’s room after drinking so many cans of soft drink. Seems jaded film reporters aren’t the only ones suitably impressed when the studios ply us with freebies during press junkets…

But Poulter soon gets to the business of the day – his role as antagonist Gally in YA sci-fi adventure The Maze Runner, future projects and working with the A list.

Collectively I loved the sense of camaraderie, this idea that they’re a band of brothers. That was exciting. The reason I really wanted to be in this film was because it was my opportunity to be a Lost Boy in a way. I was obsessed with Hook growing up and it was very reminiscent of that for me.

I was also really interested in playing Gally because it was the first time I’d played such a conflicted and tortured soul in a form as big as [The Maze Runner], so that was great and very different to what I’d previously done.

I also liked being able to play the experienced and adult figure in the context of this world.

Do you consider him the villain?

I don’t think so. In the book he’s more villainous. Talking to Wes and James [Dashner, Maze Runner author] and [screenwriter] TS Nowlin on the set we all agreed Gally needed to be a little bit more rational and justified and understandable.

He was a voice for the people who didn’t agree with Thomas. In the instances where Thomas was naÃ¯ve or too rash there was someone voicing an alternative opinion that they should stay and preserve what they’ve built so if the fight comes to them they’re ready, they won’t risk losing so many people.

Gally is that voice, it’s just the manner in which he voices his opinion isn’t always so agreeable. He’s not a natural leader whereas Thomas is.

Have you had much reaction from fans of the book?

We were overwhelmed by the support fans gave us over social media from day one of being involved. They feel a great sense of ownership over the book so it was great how enthused they were that it was being made into a film and how accepting they were of us in the roles.

For fans of the book who’ve seen the movie I think it’s been a really pleasant experience. The worst thing for us would be to make a movie that was very successful and popular but have the readership feel we’d compromised what they’d loved and formed an original attachment to. That would have been a dent in the achievement.

Director Wes Ball is also very young. What was he like?

We were very aware of how he took to the visual effects aspects and how experienced he was in that field. The only concern we might have had going in was whether he could handle the emotional elements of the story and communicate with us as actors and give us the opportunity to explore the characters, but he absolutely did.

That’s what’s going to make Wes a force of nature going forward – he has this amazing skill when it comes to visuals. He’s got an incredible eye, he’s got a real ability for storytelling and now he’s got this incredible ability to draw the best out of actors.

You’ve done lots of different genres, any you’re most comfortable in?

I don’t consider myself a comedian at all. I don’t really feel like I’m funny. I goof around a lot as myself in day-to-day life but I don’t feel that confident as a comedic performer, I feel more at home in drama. It’s still a challenge and it’s still difficult of course – I’m not a gifted dramatic actor, but that’s where my heart is. I’d love to do a combination of both, that’s my ambition.

Tell us about the project you’re working on with Alejandro González Iñárritu.

He’s an amazing man. I love his films. I’m trying to find a way of wording how I feel without sounding pretentious but it’s difficult because he’s such a marvel.

His ability to show human emotion in the rawest and realest stage is unparalleled. The cast is phenomenal, it’s full of actors I’ve admired for a long time so to be acting opposite them is really excited. I’m playing a young guy called Jim who’s an apprentice to a very well established fur hunter and we start shooting as soon as we finish this tour.

Are you looking forward to working with actors like Tom Hardy and Leo DiCaprio? Is it scary?

It is scary, but I don’t think I’m any more scared of that that I was of being in this. I know The Maze Runner is a very big stage. It’s less to do with the calibre of who’s involved than it is playing a character that’s far and away from yourself. That’s where the fear enters into it for me.