Skip to content
October 8, 2007 in CHUD.com See more stories from this title 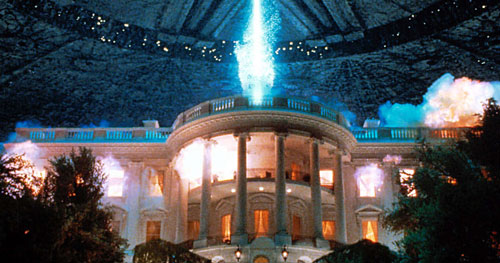 They’re maligned and hated by critics and a good deal of the moviegoing public, but they get the keys to the US summer blockbuster pool party every year.

Why? Because when you can generate $670m from a $145m investment (Michael Bay for Transformers), $736m from $150m (the Wachowski Brothers for Matrix: Reloaded) or $810m from $75m (Roland Emmerich with Independence Day), they don’t care if you make good movies or Plan 9 From Outer Space.

In fact, if poor Ed Wood and his delusions of being a competent filmmaker were still here, the studios would be breaking his door down chequebooks in hand, pleading with him to keep doing what he’s doing (considering Plan 9’s $60k budget and who knows how many millions in DVD sales so far).

In the case of one of Hollywood’s most successful Germans (ahead of Jan Speed, Twister de Bont and Wolfgang Das Boot, Poseidon Petersen), Emmerich has proven he knows his stuff time and again despite critical batterings.

His most recent offering The Day After Tomorrow contained laughable science, shoddy CGI, little plot apart from a few city-destruction money shots and essentially the same premise as his signature film, Independence Day (mankind fighting extinction against incredible odds, New York falling over). Despite taking a publicity bath, Emmerich delivered what the studio and his producers expected of him – to the tune of over half a billion from a $125m budget. Even the one critics and audiences really crucified him for (Godzilla) tripled its money.

But not before Kassar and partner Andrew Vajna jettisoned Andrew (The Fugitive) Davis from the director’s chair of Universal Soldier and gave the gig to Emmerich. He delivered a respectable return for a novice in such a tech-heavy genre and more importantly, an eye for big-screen spectacle.

Emmerich formed Centropolis Entertainment with Devlin and their first big project was the surprise hit Stargate, one of those bizarre films that was good but not world-beating but still somehow spawned a multimedia franchise worth more than most movie properties. On the strength of Stargate, Fox handed Emmerich and Devlin the megaphone for their alien invasion extravaganza and July 4, 1996 ushered in the New Blockbuster Age.

Now Warner Bros are gambling that Emmerich’s eye for glossy, jaw-dropping eye candy pays off again with their big release for summer 2008, 10,000 BC. Looking like a more PG-friendly, CGI-aided Apocalypto, it follows the adventures of a young hunter in the titular epoch as he tussles with mammoths, sabre-toothed cats and presumably nymphettes like Camilla Belle in barely-there animal skins.

To follow in 2010 is the big screen update of Isaac Asimov’s Fantastic Journey, last filmed using huge sets that looked like the work of Monet on acid in 1966 with Donald Pleasance and Racquel Welsh. Sure, it’ll be a blast – a roller coaster ride helped along by better filmmaking technology than we had in 1986 for Joe Dante’s Innerspace.

But if you need another reason to be excited, the godfather of technolust sci-fi himself, James Cameron, is warming on the of the producers chairs. It seems there’s every reason to keep watching Emmerich yet…