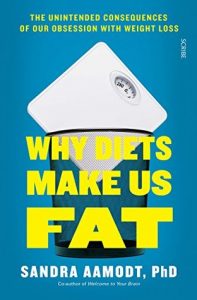 If the size and influence of the diet industry and the battles many people wage – often over decades – to control their weight seems nonsensical to you, Why Diets Make Us Fat will be perfect fodder to state your case in future. When a neuroscientist shines a light on the bodily processes involved, it’s even more astounding that so many people are duped to such an extent.

As well as the science behind the way your body controls your weight, there are a host of sobering statistics about just how taken in we are by empty (and expensive) promises. In her native USA, Aamodt says 108 million people – around a third of the population – went on diets last year, and half of them were within a healthy weight range when they started.

As far back as 2002 (according to an industry report), 231 million Europeans attempted some form of diet, with only one percent achieving permanent weight loss.

The story of our battle with our weight isn’t just about losing it, but keeping it off, and one of the lynchpins of Why Diets Make Us Fat is the body’s weight-control mechanism, an ideal weight range your brain will fight tooth and nail to keep you within. It’s determined by genetics, and it works perfectly if you let it.

In a habitat like we evolved in (ie one without billboards exhorting us to consume what we don’t need or the social strictures of eating certain meals at certain times) we’d eat when we were hungry, stop when we were full and stay within our pre-determined weight range without too much effort.

The trouble, as Aamodt spends a lot of the book outlining, is that moving our weight outside that range is both extremely hard and unhealthy. Fall below it and your brain will assume you’re starving.

The conscious manifestation is a feeling of sluggishness and constant cold, and the brain works harder to extract what nutrients it can, taking resources away from immunity or other systems. Even after years of dieting it will try to raise your weight back to your accepted range, which explains why sustained weight loss is so difficult.

Scientific research the book quotes also puts a pin in many of the dearest-held beliefs about dieting. The results aren’t that different whether we’re on low carb, low fat or intermittent starvation diets, and the rate of weight loss doesn’t change the end result much either.

Being a neuroscientist, Aamodt can also talk confidently about how the effort/reward chemistry of the brain plays a part, with hormones encouraging us to eat more when we’re dieting and making it that much harder.