Skip to content
June 6, 2019 in The Daily Telegraph See more stories from this title 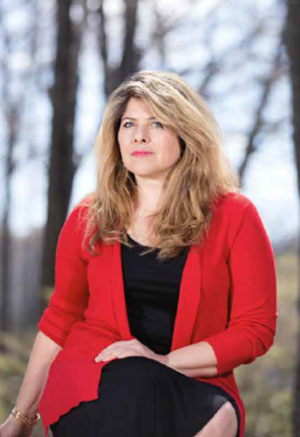 Naomi Wolf has lost none of her appetite for a good fight. The writer and activist upended the feminist movement with her 1991 book The Beauty Myth, and in the years since, she’s written about everything from how young women are refused the right to own their sexuality (1998’s Promiscuities) to the structural dangers facing the US in 2007’s The End Of America. And she still courts controversy, most recently defending her stances on Julian Assange (she’s pro) or slamming Hillary Clinton as “not a great candidate” as she assessed the results of the 2016 US election.

In an exclusive interview with Stellar ahead of the release of her new book Outrages, Wolf reflects on her work, family, the link between women’s and gay rights, the #MeToo movement… and Chris Lilley.

Such varied work seems to indicate you’re an intensely curious person. Where did that come from?

I’ve always been fascinated by cultural history, by the idea that we don’t have to think the way we’re told and we can look back to see what led us to make those assumptions or conventional wisdom.

I grew up in an aberrantly inclusive and egalitarian time in history (1960/70s San Francisco), and was inspired by the gay and lesbian rights movement. I believed the whole whole world was like that, so I was shocked to go East to school and into the workforce and discover how unjust certain hierarchies were and how certain groups got privilege and others got marginalisation.

The Beauty Myth is almost 30. Have women’s rights improved?

Things are considerably better. It’s a vibrant time for feminism, in most places there’s no fear of women espousing feminist ideals. Of course there’s still anorexia, bulimia, body dysmorphia, there’s still a lot of bad stuff, but I don’t feel it colonises women’s consciousness overwhelmingly the way it used to.

Are things like Dove’s real women campaign signs of change?

It’s an advertising campaign, it’s not huge structural change. But [there are] millions of little changes that embrace the inclusiveness around gender nonbinary self-presentation. They’re all symptoms of greater inner strength around the issue of gender norms.

Have the #Metoo and #Timesup movements really made a difference?

It makes all the difference as a starting point for people who’ve been sexually abused or molested to tell the truth. Psychologically it’s hugely important and I’m kind of offended as a survivor whenever people say ‘oh, it’s just a hashtag’, as if telling the truth about your assault or naming your assailant is trivial. But real structural change doesn’t end with truth-telling. Laws need to be enforced, civil lawsuits have to be waged.

How does the new climate because of #Metoo and #Timesup change your experience of reporting your 1984 sexual harassment by a Yale professor, which you did in 2004?

There’s been an evolution at least on the part of the press around these issues, but not institutionally. I’m not the only person who named a violation of that kind but he’s still meeting with students. The revolution isn’t complete because that’s a very unsafe learning environment and it makes me very angry. My son refused to apply to Yale because of my experience.

Your book Outrages chronicles the censorship and oppression of gay men in the Victorian era. Was there a correlation with the oppression of women?

At a time when many populations were becoming unruly and demanding rights, the state innovated new ways to say ‘we’re going to identify the most private sex act as crimes and surveil this private space’. At a time when women were clamouring to scrutinise the sexual abuses by straight men, it’s notable that the lifestyle we call ‘gay’ was remade into a sexual scourge.

You’re politically active, you’re always writing, you have grown children as well as a new family. What do you do to switch off?

I now have a seven year old stepson in my life so there’s been lots of clay and painting. We’re trying to interest him in cooking, which he’s really good at. We like Veep, we love The Office. My daughter and I watch Chris Lilley’s new series [Lunatics) – he’s disturbing but a genius.

Does having children make the various struggles for rights you’ve fought more important or urgent?

I learnt from raising my two amazing grown up children that there’s really no point in anything without putting time with the people you love at the centre of everything.

Outrages is out May 28 from Hachette Australia