Skip to content
October 16, 2011 in The Sun Herald See more stories from this title 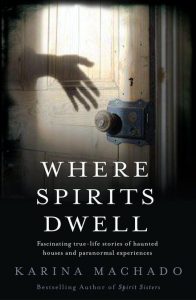 Things that go bump in the night seem increasingly out of place in today’s world as technology promises to solve all the mysteries of the world and we become increasingly secular and cynical. It makes Sydney journalist Karina Machado’s work all the more fascinating, because if there’s one thing both her 2009 book (Spirit Sisters) and Where Spirits Dwell prove, unexplained phenomena still touch many of our lives.

Where Spirits Dwell is mainly composed of everyday people whose busy lives are interrupted, tipped upside down or even threatened by the supernatural. If you read it hoping for tales of terror and bloodshed, perhaps the most surprising aspect is how many people accept ghostly phenomena with mere bemusement before going on with their lives.

While many of us may assume it would have us out in the street in our pyjamas screaming hysterically, a common thread in Where Spirits Dwell is the curiosity rather than terror the visitor generates. In many cases — particularly when witnesses attribute the phenomena to a passed-on loved one — they report feelings of peace and love.

Not that Where Spirits Dwell doesn’t have its scary moments. A young Petersham mother wakes in bed in the small hours to hear the toys in her son’s room, and when Machado reveals the toddler was actually in bed with his mother at the time you’ll feel a tingle down your spine the likes of which you expect from a good horror novel.

Machado herself was included in many of the treatments people sought for their unwanted guests thanks to her knowledge of a psychic medium from the Australian Institute of Parapsychological Research, so many of the cases she describes have a happy resolution where ‘good spirits’ have helped those with nefarious intentions or who simply don’t know they’ve died to ‘cross over’.

Often the psychic involved can tell everything he needs to know from the presence itself, but on other occasions Machado takes us through the research process as her or her interviewees sift old records or newspapers, overturning stories of tragic premature death or feelings so strong the departed carried them to the other side. One of the oldest arguments in parapsychology is whether ghosts are really manifestations of the formerly living or some as-yet undiscovered human talent. Despite paranormal experiences in her own life Machado doesn’t exactly come down on the side of the former, but many of the people she speaks to are left in no doubt.

It’s also informative, overturning quite a bit of what you think you know about hauntings. One of the most disturbing revelations is that it’s sometimes the person that’s haunted — not the house — and Machado’s research contends that some of us who are simply ‘wired’ to see spirits because of psychic powers are those who attract them.

In a rare treat in non fiction, her talent as a writer complements the content beautifully. What could have been a very procedural and repetitive book describing one case after another is well structured to maintain the flow of each while presenting a new theme to consider in each chapter. The structure within each incident is effective too, and Machado uses some smart devices to keep you riveted — after the spooky words ‘what he saw next haunted him for a decade’, she breaks to give you the case background before telling you what the subject saw.

The writing itself is also lyrical and at times beautiful, making Where Spirits Dwell artistic rather than just reportage, and emotional rather than just instructive. Machado has also unearthed some tragic stories, including the mother of murdered schoolgirl Ebony Simpson, who believes her daughter’s presence remains, and the heartbreaking tale of the woman who lost her infant son to SIDS after trying for him for 10 years but who still sees him playing along Manly beach.

It may prompt you to hop online for the host of ‘authentic’ photos and footage (search for ‘Hampton Court skeletor’), but at the very least Where Spirits Dwell will make you look twice at the world around you and who might just be moving around the houses in your suburb (including your own) in the dead of night.