Skip to content
February 3, 2017 in Redshift See more stories from this title 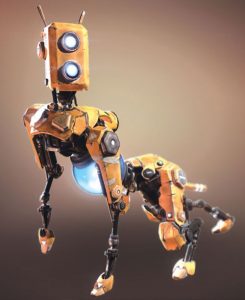 Both fandom and professional design have a rich history of taking characters or creatures that exist only in digital form and building them in the real world.

Makeup artist Holly Conrad stopped 2011’s Comic Con in its tracks with her costumes based on the game Mass Effect, with incredibly detailed creature makeup. For the cinema release of Pixar’s Wall.E, LA studio JJ&A created a fully articulated cardboard model of the titular robot for the cinema standees that was sent to movie theatres all over the world.

Early on during such projects, designers or engineers invariably come up against properties of the real world such as gravity, mass, torque, and tension – forces CGI animators and game designers can conveniently ignore.