Skip to content
January 25, 2019 in The Australian See more stories from this title 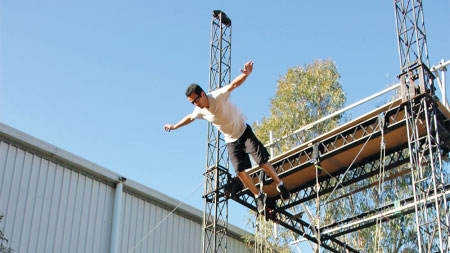 As soon as the stunt axe hit him on the Malaysian set of the action/adventure film he was wokring on in 2011, stunt performer Destan Arslanoski knew something had gone wrong.

The prop, wielded by British actor Craig Fairbrass, was little different from a normal wooden axe handle, and instead of hitting the spine protector Arslanoski – then 23 – wore, Fairbrass missed it and hit him full force across the lower back.

“I basically fell straight to the floor,” Arslanoski remembers. “Everyone saw what happened, a couple of guys tried to help me up but I couldn’t walk. They dragged me off the set and put me under a fan with no shade on an almost 50 degree day.”

Sweltering in the Kuala Lumpur sun for almost an hour and with no feeling in his legs, Arslanoski had seen only a first aid attendant rather than a qualified paramedic. When an ambulance finally arrived the paramedics covered him with a vomit-stained blanket and tried for several fruitless minutes to inject painkillers, claiming they couldn’t find a vein. “It was all shonky, they just seemed so inexperienced,” he says.