Skip to content
May 14, 2013 in Loaded See more stories from this title 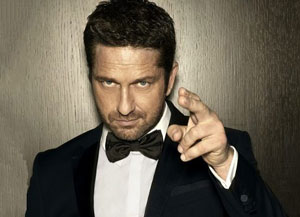 Scruffy pretty-boy or bloodthirsty maniac? Drew Turney asks Gerard Butler just who he thinks he is.

It’s hard to pin the real Gerard Butler down. After his time in the spotlight more or less began with 2006’s shouty, right wing parable 300 (signature line; ‘This! Is! Sparta!’ through gritted teeth), he’s seemed to inhabit two worlds.

The first is the brawny, macho action genre. 300 was a rippling, muscled mission statement for masculinity’s brutal rawness, but since then he’s been a little more sensitive and low key in action thrillers like Gamer and Law Abiding Citizen. Then he’s known for the kind of romantic comedies critics routinely sneer at like The Ugly Truth and The Bounty Hunter.

Of course he’s done more than that as his new film Playing For Keeps shows, in which he plays an estranged soccer dad who learns to reconnect with his young son and grow up a little himself

But meeting him in Los Angeles while promoting the film, you realise why audiences perceive him as either the tousled and sexy romantic or the stoic, silent type whose language is brute violence. In a dark, GQ-inspired suit but with a few days of stubble and his signature boyish grin, Butler looks like both a lover and a fighter.

“The first role I played was Attila the Hun,” the actor begins when talking about the genres audiences know and love him for. “They always send these summaries to the casting directors and it described Attila as being ‘ferocious, violent, intense, fiery’. And they wanted that from the actor the second he walked in the room. How do you walk into a room and look ferocious and violent and virile and dangerous?” Butler’s apparently too modest. He aced the audition, got the role and 2001’s TV movie Attila was his big break.

Of course, when you look over Butler’s CV you realise he’s done far more than hunky swagger-and-smile and run-you-through-with-a-spear, as he’s quick to point out. “It’s not like I’ve only played particularly masculine roles before or since then,” the 43-year-old says. “I’ve played some crazy roles, I’ve played some funny roles. But I hadn’t played some great conquering hero until Attila. It’s only since then I’ve gone on to play these epic roles that are exceptionally masculine.”

By now we’re certain he won’t respond kindly to words like ‘beefcake’. Like most actors known for their good looks, Butler wants to be remembered for what’s underneath. In fact, it seems the rest of us see a different exterior than the one he looks at in the mirror every morning.

“I actually don’t think people see me as this macho figure until somebody brings it up. Now you’ve mentioned it I say to myself ‘okay, is that how people see me?’ I don’t want to just be seen as that hunk or lump of meat. After 300 I was being offered a lot of money to do action movies and it was a dangerous time because I don’t want to be that action guy. But I guess people are going to see you as they’re going to see you and there’s not a massive amount you can do about that except get on with it.”

Not that Butler hasn’t tried to break out of whatever typecasting Hollywood has tried to force on him. Since his first big-screen appearance frolicking in the freezing Scottish surf as Billy Connolly’s brother in Her Majesty Mrs Brown, he happens to have played some very iconic characters, from Dracula to the Phantom of the Opera. He’s also done a kids’ film (Nim’s Island, 2008), voice work (How To Train Your Dragon, 2010) and Shakespeare (Coriolanus, 2011).

In fact those last two entries in Butler’s resume remind you that throughout his whole oeuvre, he’s only used his native accent a couple of times (Playing For Keeps being the latest). He got to do his own brogue in Ralph Fiennes contemporary version of Shakespeare’s Coriolanus, but he had to thrash his way through the Bard’s famously dense language. “It’s rare that I just get to do a movie with no challenges in terms of dialect, so being able to just play a Scotsman in Playing For Keeps was exciting.”

Speaking of Scots, Butler is part of a juggernaut of actors from outside America conquering Hollywood. The UK in particular is staging its own new offensive to take over the silver screen, with the biggest superheroes in the world played by Brits (Andrew Garfield as Spider-Man, Christian Bale as Batman and Henry Cavill in Zack Snyder’s upcoming Man Of Steel).

Put them together with the chart-shredding success of musical acts like Adele and One Direction, and America must feel like it’s under siege from England all over again. “There’s a huge amount of talent both from bands and actors,” Butler agrees. “You watch movies being made now and the British are popping up everywhere. In America there are a lot of incredible actors but there is that pool that tends to be kind of the same. You get something slightly fresher, a different take on things when you bring in an Australian or a Brit.”

Maybe he’s talking about the legendary hardness the unforgiving north of England seems to breed. Watch the average Scot on screen and he won’t be talking about his feelings or seeing a therapist. He’ll be wrangling a giant three headed dog (Robbie Coltrane as Hagrid in the Harry Potter films), bedding hot Russian double agents after a martini the day before killing some megalomaniac (Sean Connery as James Bond), throwing a beer mug into the crowd to start a bar fight (Robert Carlyle as Begbie in Trainspotting), helping destroy the Death Star (Denis Lawson as Wedge in Star Wars), or headlining Pixar’s feminist manifesto (Kelly Macdonald in Brave).

“In terms of average size and strength, American blokes would be bigger than your average Scot but in terms of a gravitas, you know, that emotional maturity, I think Europeans have it,” Butler says when asked why they’re bred differently in the UK. “With British people, there’s often just something heavier about the guys, they’re more naturally grown up.”

Something else they do more heavily in the UK than just about anywhere is drink. Curiously the Eastern European former Soviet republics fill the top 10, but the UK beats the US for total alcohol consumption, and it’s something Butler has firsthand experience with, battling alcoholism before he was famous.

As he said in an interview in early 2012; ‘I’d gone from a 16 year old who couldn’t wait to grasp life to a 22 year old who didn’t care if he died in his sleep’. They’re days Butler has left behind him, cleaning up and moving to London where he started getting roles. These days he’s teetotal, saying he hasn’t touched a drop in 15 years.

“There is a large part of that society that loves to drink,” he now says of his fellow Brits. “It’s been an expression of theirs for thousands of years. You go back to Celtic times and they love to drink. However when you stop drinking, you also realise there’s a fairly massive part of society that don’t drink or just like a little tipple. So when you’re in the midst of it it’s hard to see where you draw the line between social drinking and problem drinking because most people are really drinking a lot.”

Like many in the public eye, Butler probably thought past behaviour was ancient history, but as it so often does, his past came back to haunt him soon after his alcoholism revelations when it was revealed he checked into the famed Betty Ford Center to help him with an addiction to painkillers. According to celebrity gossip website TMZ.com, the actor started suffering back pain filming 300, and a surfing injury in December 2011 while shooting Chasing Mavericks didn’t help.

After a three-week stint at Betty Ford, Butler found a far more difficult challenge awaited him in the ensuing media storm. “Most of the press are lovely,” he says now, “but as they say ‘if it bleeds it leads’, and if it ain’t real they’ll just make it up. It nurtures negativity and poison, this joy in other’s failure. It’s definitely not the nicest part of the business.”

Earlier in our discussion, Butler says he has an addictive personality. He didn’t say whether he was talking about boozing or his legendary womaniser status, and he won’t be drawn on it when Loaded brings it up again, merely adding that it has its upsides.

“I think that’s why I’m here. I’ve been addictive and obsessive about a lot of stuff including my career and I feel that when you set a focus on something, positive or negative, if you put a lot of energy in that direction there’s a very good chance you’re going to get there, for better or for worse.”

We start by very gently asking about his status right now. “Yeah there is a lady in my life right now, very beautiful, very lovely,” he says, not quite confirming whether it’s Romanian model Madalina Ghenea, as the reports have said.

But he’s even less forthcoming on the subject of a rumoured affair with co-star Jessica Biel while filming Playing For Keeps in Shreveport, Louisiana. It’s a popular story, with ‘a source close to’ the star saying he considers Biel the one that got away, regretting the way he treated her by running scared when she wanted something more serious.

Because Playing For Keeps is about a man hoping to rekindle a relationship with Jessica Biel (albeit dressing down as a suburban mother), we feel safe asking if it’s life imitating art, the other way around, or rubbish altogether.

But as Butler has portrayed so often on screen and is only now finding out in real life, it’s a cruel world…