Skip to content
January 2, 2013 in Dazed and Confused See more stories from this title 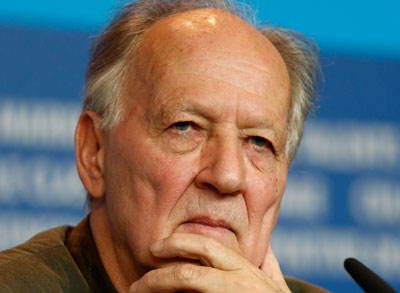 Try to pin down Werner Herzog’s career. Impossible, isn’t it? Since his ‘turbulent’ years with muse Klaus Kinski he’s mastered more cinematic forms than most artists manage a single one of in a whole career. Today most people know the 70-year-old, Munich-born auteur as the critically acclaimed documentary maker of films like Grizzly Man, Into The Abyss and Cave of Forgotten Dreams.

Fewer know him for his acting, but since 1998 he’s popped up in the unlikeliest English language movies, from the poker mockumentary The Grand to a 2009 short film as the voice of a plastic bag. But it’s his role as The Zec, the unflappable criminal overlord up against Tom Cruise in the mystery thriller Jack Reacher, that’s going to have you squirming in your seat. Herzog used his at-times delightful turn of phrase to explain why he’s so good at being bad, how he picks projects and having no idea who David Fincher is.

You’re very scary as The Zec.

That was the point. The only point.

Did you have any inspiration for the character?

No, it’s all standardisations of course. Russians are very sweet people, very deep, very different than you would imagine. I know what I’m talking about because I married to a Russian woman from Siberia.

Tell us about The Zec’s signature scene [in Herzog’s most chilling scene, he tells an underling to chew off his own fingers].

That scene was longer, I was very quiet and just kept encouraging [the victim] and the studio got scared. They wanted PG-13, which means no sex, no physical violence, no swearing, no blasphemy. And I’m very quietly inviting him to eat his fingers off and it was so scary the studio wanted to cut it down. [Writer/director] Chris McQuarrie cut it down and still the studio was scared about it. So we used a third, even more cut-down version and they’re still scared.

If you find it scary then everything is good.

Talk about getting into the character of The Zec?

I could literally step from this table and if there were a camera and actors ready, I would step into it and I would be scary.

As such an esteemed filmmaker yourself, is it tempting to tell everybody what to do?

No, I wouldn’t interfere at all. Absolutely not. And I have no problems following direction. There was one tiny, tiny moment where I made a remark that was picked up, but I shouldn’t even have said it.

Did Tom Cruise apologise for pointing a gun at your face?

No, that was part of the deal. We are in movies.

Did you know he’s a big fan of yours?

I didn’t know that. He’s very respectful and apparently has seen some of my films. But he’s seen some acting of mine and he apparently wanted to have me as a real bad ass, a really bad and dangerous character. They have much larger parts for bad guys but they have weapons, and they needed somebody who looked dangerous before he even spoke.

What’s changed in the business, for better or worse?

Changes are coming. I see it and I don’t want to grow old about certain things. Two nights ago I did live streaming of a rock concert over the Internet. Eighteen cameras, no post-production. So I set the visual styling, and we had internet connectivity so the audience could participate and send in photos, which was part of the show.

I’m always curious about what’s coming at me. Of course there have been huge changes in the last 45-50 years of cinema, great innovations like digital effects, although I do not use them. There’s phenomenal possibility out there. Audiences have changed, drastically.

Of course, and that’s going to outlive anything. Whatever is coming at us in forms of digital effect and franchised movie making and things, the long-range survival is great story telling. That’s what’s good about Jack Reacher.

Is acting just for fun or does it give you a different perspective on directing?

The answer is very simple, I love everything that has to do with cinema. I like writing a screenplay, directing, editing and producing, I just love it all.

It’s all a pleasure. I do what comes at me swinging most wildly and then I deal with it. I’ve never had a career because I’ve never planned step one, step two. It’s all come at me like burglars in the night. And you’re there in your kitchen and you hear the noise and if one of them comes at you swinging more wildly you have to deal with that one first.

Is that how you’ve come across most of your projects?

Take Grizzly Man. I swear to God I was not looking for a film. I’d been in the office of a producer who had been very friendly to me and I paid him a courtesy visit and after ten minutes I got up to leave and reached in my pocket and there were lots of papers and half eaten lunch salad and I realised my car keys were not in my pocket, they were somewhere on the desk.

We were looking for my car keys and he spots something and pushes it to me and says ‘read this, we’re planning a very interesting film’. So I read it and ten minutes later I went straight back and asked about the status of the film, who was directing it.

The producer, who is also a director, said ‘I’m kind of directing it’, and I knew then and there he wasn’t completely sure. So I stretched my hand to him and said ‘I will direct it’, and I was in business. I was not looking for a film, I was looking for my car keys.

Are you a journalist at heart?

No, I am a poet. If you look at Into The Abyss, I wanted to interview a man on death row, and the authorities had no objection because I came without a catalogue of questions. I wanted a discourse with this person who was going to be executed eight days later and had no idea what I was going to say to him.

Any similarities between working with Klaus Kinski and Tom Cruise?

Would you like to direct a film with Tom Cruise?

I would need a real good story, one that would fit. I wouldn’t randomly have him in a film where he wouldn’t be the right one.

Your body of work is primarily in documentaries lately. Do you have a passion for telling the truth?

You’re working almost constantly. Are you a workaholic?

That word couldn’t be more wrong because I work very calmly and quietly. For example, on Bad Lieutenant my days of shooting were normally over by 2 or 3pm, not a single hour over time. I brought the film in two days under schedule and $2.6 million under budget, which is unheard of in Hollywood. Now the producer wants to marry me.

And my team got nervous, asking ‘what about the coverage?’ I had to ask my assistant what the term meant. Is it something to do with insurance? No, no, no, they said, shoot from this angle here and that angle there. I said no, I’ve shot everything I need for the screen. At one point Nicolas Cage said, ‘Silence everyone for a moment’. Everybody falls silent and he says ‘finally somebody who knows what’s he doing’.

So what do you think of someone like David Fincher who does 60, 70 takes?

I haven’t seen any of his films. I do not know who he is. But let him do it if the result is good.