Skip to content
February 28, 2015 in Total Film See more stories from this title 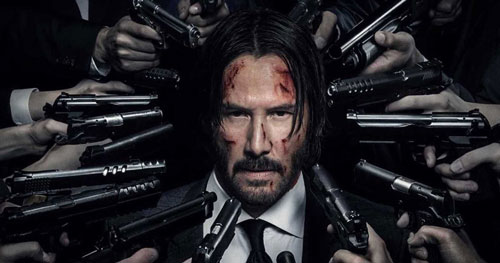 The hitman who leaves it all behind before he’s pulled back into the game when it gets personal… we’ve seen it so many times it’s almost a trademark, let alone a genre all its own.

Such a crowded cinematic history didn’t seem to make John Wick an easy sell, but audiences around the world have responded to former stuntmen David Leitch and Chad Stahelski’s $20m action romp, the box office returning the budget threefold so far.

“We’re pretty familiar with a former killer dragged back to the violent life against his will,” agrees star Keanu Reeves, who plays the former assassin-for-hire. “Text-wise you’re in that particular archetype, but the directors have differentiated themselves using the characters and the way the world looks. You might have seen this story but you haven’t seen it told like this.”

Though set in contemporary New York, John Wick portrays what Leitch and Stahelski call a ‘hyper-real’ world that pits him against fearsome Russian mobsters. “We tried to show New York in a different way,” Stahelski says. “We developed the locations wanting you to think you could look them up in the phone book and go there because they look so cool.”

And just like the realistic-but-stylised world of the film, when John straps on his Heckler & Koch P30Ls, Reeves’ martial arts-inspired fighting and shooting style is balletic, frenetic and quite real.

The element most responsible for John Wick’s visual language, according to Shahelski, is Reeves himself. “We’ve worked with so many action guys,” he says. “How many are going to cry over a puppy and a letter in their boxer shorts? There aren’t a lot of action guys out there who can show you that stuff, they don’t know how. He brings you a multidimensional role instead of this guy who’s just a fucking Terminator.”

Reeves agrees, invoking revenge flicks like Unforgiven that feature heroes with vulnerabilities. “There’s a grace to him but also a grit,” the 50-year-old star says of John. “He’s kind of schlumpy. When he takes that shower and you see the tattoo he looks fit, but I asked the directors if they wanted me to have more muscle and they said ‘no, we just want you to look capable’.”

The secret, Leitch and Stahelski explain, was settling on John Wick’s distinctive tone early and sticking to it throughout, letting it inform everything from the costuming to the performances. It’s a trick they’ve learnt after 20 years on sets under names that include Snyder, Fincher and the Wachowskis (whom they consider mentors).

“As action choreographers the one question we ask directors is ‘What’s the tone?'” Stahelski says. “Give us a reference, do you want Taken, do you want Jackie Chan? The biggest mistake most new directors who’ve come from stunts or second unit make is not knowing that. They say ‘it’s kind of this and kind of that’ and you can tell nobody has a clue.”

It’s a commanding return to a genre Reeves has always had success in. “I haven’t done that many action films,” he says, before admitting to a list of some of the most impactful action films in cinema, from Point Break and Speed to The Matrix.

And just like those films, Leitch and Stahelski have wisely used Reeves’ presence as much as they can, putting his considerable action chops to good use. “You can already see how the Hollywood studio version works,” Stahelski says. “They take the greatest actors and flash the camera around and use stunt doubles and camera tricks. Are you invested in that character? You are up until they do action, then all of a sudden you’re watching Captain America’s stunt double.”

Keanu Reeves on his storied career

How have action movies changed since the days of Point Break and Speed?

The biggest change is probably the amount of wire work. I started to feel the technologies when I did Point Break but mostly in Speed, the way they could hide wires and harnesses and put me in places they weren’t normally putting actors.

You seem to have spent the last little while trying to create passion projects.

Yeah, for the past 10 years I’ve been trying to make things, I guess. So whether it was a documentary like Side by Side or starting a production company or doing super independent movie Generation Um, I’ve been developing projects and then directing.

Any Bill and Ted 3 news?

There’s a script waiting for another draft and we need the rights from MGM, so it’s in the business part of show business.

[Writers] Chris Matheson and Ed Sullivan have been really cool about collaborating with Alex Winter and I. They’ve worked really hard in the past few years. Right now it’s at a place where it needs to take the next step.