Skip to content
January 1, 2007 in Black+White See more stories from this title 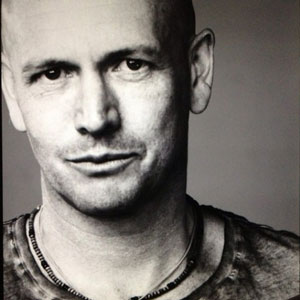 New York based photographer Warwick Saint keeps his feet on the ground, even with household names as his subjects.

There’s a scene in Hollywood blockbuster Superman Returns that embodies the plight of the modern photographer; Daily Planet editor Perry White (Frank Langella) has a close up, full-frontal shot of Superman in action taken by a kid with a camera phone. He asks staff photographer Jimmy Olsen (Sam Huntington) for the results of his labour. Olsen sheepishly produces a grainy shot of the sky, Superman a blurry smudge as he streaks by a hundred feet overhead.

“It’s more difficult than it’s ever been because of the amount of photographers and the technology available to them,” says Warwick Saint from his New York home, where Black+White has miscalculated the time difference and dragged him indignantly out of bed. Thankfully, Saint is as affable and interested in talking photography as we could hope for.

“In the 80s, before Photoshop,” he continues, outlining the creative challenge facing artists who — in his words — want to be remembered, “you could probably have a few techniques to build your career on. Nowadays it’s relatively easy to take a good picture, you just hand it over to your retoucher. Anyone can come out of college and say ‘I’m a photographer now’, so while it’s become easier to take a great picture it’s become exponentially harder to be a great photographer. It’s more about a vision and a point of view that you have to market as opposed to taking nice pictures.”

Saint’s altogether too modest. By his own admission, pushing the button is a tiny part of the job. He speaks highly of most of his famous subjects, but the tantrums over the incorrect brand of bottled water one imagines aren’t the biggest problem. There’s the time nobody told the stylist Drew Barrymore didn’t associate with brands that produce fur, for instance. “At the last moment we had to rush back to town and restyle the entire shoot,” Saint recalls. “In a four or five hour shoot you can end up with only an hour left to take photos, so you’ve got to be quick on your feet.”

Creativity is in the 34-year-old South African native’s blood. His father was the founder and creative director of the country’s hippest graphic design studio, and as a baby, Saint modelled with his mother for his father’s work. ‘Bought up’ in a photographic studio, the sense of personal still seems to be the most important thing to him, despite shooting some of the most famous people on the planet and working for some of the most prestigious global sports and fashion brands.

“It’s very important — in fact most important — to keep up with personal stuff when you’re a photographer,” he thinks. “If somebody gives you a context to do something it’s a lot easier. If somebody says ‘go and shoot whatever you want’, that’s the question a lot of photographers need to find out for themselves, because once you discover what you want and how you want to express your point of view of the world that’s the difference between being a photographer instead of just doing nice pictures. You have to have a point of view.”