Skip to content
August 12, 2004 in Moviehole See more stories from this title 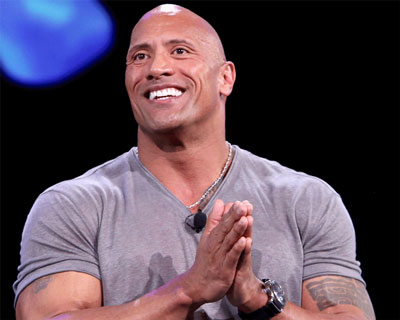 Arnold Schwarzenegger’s command of English might be the reason he appeared like such an automaton (used to wonderful effect in his first major American casting as The Terminator), but after two decades, his attempts at the ‘acting’ craft, using emotion and expression, have still been fumbling at best.

When Arnie symbolically passed the mantle of action movie alpha male in Welcome to the Jungle, it was to a pro wrestler. The possibility of a new action hero with any more acting talent than the last looked slim.

But as anyone who saw The Scorpion King and Welcome to the Jungle knows, the kid formerly known as Dwayne Johnston brings a surprising amount of brevity and clarity to his performance, outacting many of his Hollywood contemporaries.

In real life, he’s no less impressive. He thinks fast and speaks clearly. You’d think you were talking to a teacher or an IT technician. Instead, you’re talking to a talented and lucky young guy who knows where’s he’s at and more importantly, knows where he has to go.

‘I find solace in the fact that I give my best effort, which is to work with everybody across the board — from the producers to the directors to the studio and be a complete team player.’

With his background in pro wrestling, the Rock knows all about being a team player, and rather than sitting in an ivory tower in Hollywood, it’s a team he still holds dearly.

‘I love wrestling, I grew up in wrestling,’ he says. ‘My father and grandfather were both wrestlers. That’s why every once in awhile I go back and help out the company whenever and wherever I can, I help out the guys in terms of their performance. Plus it’s fun!’

And in an ironic twist, The Rock is one pro wrestler who might appreciate the finer points of live theatre more than many film stars of today because of one essential element; the audience.

‘When you perform live, not necessarily with wrestling but when you’re writing dialogue and writing jokes it’s tough, so I give it up for a lot of comedians and Broadway actors out there, it’s really hard. I have lot of time for people who perform live because it’s all about the reaction of a live audience. It’s very captivating and you don’t get that in film. Film is very gratifying in a lot of ways but you don’t get that immediate response.’

And The Rock knows something about response in his last movie, Walking Tall. An old fashioned little guy against a town full of toughs (but with a very big little guy), he plays special forces soldier Chris Vaughan, returning to his Washington hometown to find it transformed.

The main source of employment, the lumber mill, has closed down, the kids are all dealing (and using) drugs, shops and businesses are boarded up, and overlooking it all is a gaudy casino run by the town’s unofficial patriarch, Jay Hamilton (McDonough).

The last thing Chris wants is trouble, so he agrees to a night out at the casino with his buddies. But when he sees a dealer using loaded dice, he can’t ignore it. After his accusation, security comes in and an all-out brawl ensues. What makes matters worse is that the casino security force is made up almost exclusively of Chris and his friends’ old football rivals, and things turn serious when they violently bash Chris and leave him for dead.

When he tries to get the local Sheriff to act, he meets a brick wall of resistance and realises what his town has turned into — a prison held tightly in sway by Hamilton and his interests, with the local kids hooked on his products, the townspeople enslaved to work at his casino and the law in his pocket.

Rather than just waltz in and smash things up (which he does anyway), Chris goes about things the right way, trying to get himself elected sheriff so he can clean up his beloved town, drawing the ire of Hamilton and his cohorts in the process.

It’s all slightly unrealistic, but done with a strong dramatic bent (with little of the wry comedy we’ve seen in most of The Rock’s movies) that it’s hard to not believe in. Not only a commanding physical presence, the former WWE wrestling champion brings a gratifying level of depth and humanity to the role first bought to life in the 1973.

It’s also been an interesting career for both Knoxville and McDonough, coming from TV’s Jackass and Band of Brothers respectively, the latter quickly becoming typecast as the slightly edgy villain (as he was in the risible Timeline early this year).

With little comic shtick or the genre trappings he had to fall back on in The Scorpion King or Welcome to the Jungle, this movie is all Rock — leaving him to prove his own mettle wielding the dialogue and his signature block of lumber, both of which he handles with style.