Skip to content
March 29, 2008 in ScienceNetwork WA See more stories from this title 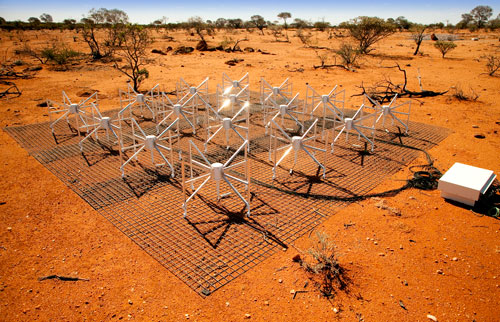 THE next generation of radio astronomy is getting closer for WA scientists as the Murchison Widefield Array (MWA) begins to go online in the desert north east of Geraldton.

When fully operational, the MWA will surpass the capacities of the most powerful radioastronomy facilities in the world. A joint project between Harvard, MIT, the Universities of Sydney, Hobart, ANU, UWA, Curtin, the CSIRO and private partners, it’s being regarded as a ‘dry run’ for Australia’s bid to host the Square kilometre Array (SKA) project.

The MWA will eventually comprise 512 arrays, each with 16 dipole antennas attached. It’s a low frequency facility with three main scientific goals. The first is to observe the Epoch of Reionisation (EOR), the period of early development of the universe. When early matter was inert, the first light sources like stars or galaxies ionised it, and measuring this ancient ionisation will teach us more about the formation of matter.

The second is to study space ‘weather’ in larger portions of the sky than before because of the MWA’s wide field, and the third is a wide-area, high-sensitivity survey of radioastronomical activity six times more comprehensive than any that have come before it.

The University of Melbourne is the Australian Project Manager, managing all funding and administration for Australian institutions and partners, and Professor Rachel Webster, who’s just been made chair of the MWA board, explains how the system will work.

“There are two aspects to the data crunching,” she says. “The correlator will be onsite to collect the data, and the second stage is a supercomputer to process it into a usable form. We planned to put that on site but running a supercomputer in the desert 350km from the nearest backup will be hard. Basing it in Geraldton or Perth makes a lot more sense.”

It’s planned the data will travel from the correlator to the supercomputer via a dedicated fibre optic link developed by the CSIRO. All three are due to be deployed in July/August 2008.

The MWA will be one of Curtin’s professor of radioastronomy Steven Tingay’s major projects. “We’re providing technology and expertise in the construction and operational phases,” he says, “and in the interpretation of the ongoing observations to come from the MWA.”

At UWA, Professor Lister Staveley-Smith is involved in what he calls the ‘central nervous system’ of the MWA. The system will be software-driven and deploy control interfaces Staveley-Smith describes as ‘glorified web pages’, a blend of everything from application development to shareware. The UWA team is about to start working with original software engineers at Harvard University to deploy the final product.

While the Murchison site has been chosen for its comparative radio silence it’s neither easy to reach nor to install high tech astronomy equipment. Professor Merv Lynch of Curtin University reports that his brief for the project is site infrastructure.

“This project needs a base in WA from which to operate,” he says, referring to the global effort behind the MWA. “The various subsystems are all shipped to Curtin for integration, and we often fly in the relevant people who’ve built them.”