Skip to content
January 19, 2018 in Stage & Screen See more stories from this title 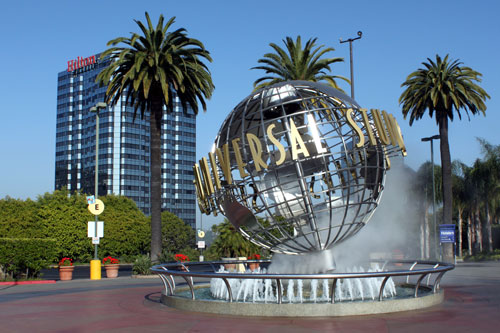 Of all the quintessential attractions Los Angeles has to offer, Universal Studios – nestled at the eastern end of the Hollywood Hills – is among the best. It’s not only fun, it’s informative.

Sprawling down the hill from the main public entrance, the century old studio comprises the studio lot and offices as well as the well known theme park and entertainment precinct. A 10 minute drive from the centre of Hollywood, it’s a must if you’re a movie fan or thrillseeker alike.

Arrive early, as the lines grow throughout the morning and you can easily wait for 30 to 60 minutes to get in. Universal Studios is always busy but the lines for rides and entry aren’t as brutal as Disneyland, where you can easily spend hours in the day just waiting to get on stuff.

Once inside, a lot of locals will tell you to do the whole park backwards – even though there’s a lot to see and do (and spend money on) right inside the grand art deco entrance, most people will be making their way down the hill from the upper to the lower lots slowly, stopping at each ride, attraction and world in turn.

But taking the ten or fifteen minute walk down the three huge escalators to the end of the lower lot will mean you’ll do everything against the crowd. It lets you do the bigger, scarier rides like The Mummy, Jurassic Park and Transformers first and work your way back to the upper lot attractions like The Simpsons Ride, Minion Mayhem or the Wizarding World of Harry Potter.

But the real magic for many visitors is in the famous backlot tram tour. Operating since 1915 (the trams came into service in 1964), the tour is the closest you’ll ever get to the way Hollywood really works as well as showing you a thrilling glimpse of movie history. The tour operates all day, ending an hour before closing, and although there’s no real best time to ride you’ll want to do so during the daylight hours as most of it’s outdoors.

The tram trundles down the hill into the working end of the studio where you’ll see a lot of the purpose-made ‘worlds’ like a Mexican pueblo (complete with a man-made flash flood), European street full of cafes and a New York block full of brownstone houses with their distinctively weird perspective to make them look further away on camera.

You’ll also go past the sound stages where some of the world’s most beloved films were shot – giant indoor warehouse spaces where movie and TV productions build their interiors. Office precincts contain bungalows that have (and still do) housed the offices of luminaries like Alfred Hitchcock and Steven Spielberg – if you go often enough or are lucky enough you’re certain to catch a glimpse of a famous face.

Some of the best parts of the studio tour are the individual sets and attractions you go past or take part in. There are perennial favourites that have been there forever like Jaws harbour (also the shooting location of Murder She Wrote), the Psycho house and Earthquake, where you stop in a subway station that crumbles into destruction around you.

But the studio often introduces new components using the latest technology. At one point the tram crawls around an ominous bend into a cave of splintered rock. Inside you put your 3D glasses on and find yourself in a primeval jungle where you’re set upon by a brawl between King Kong and two dinosaurs. Created by Peter Jackson, it’s an immersive, all-surround 3D film where the monsters rock the tram on its perilous track, spraying you with water and blasts of heat. A similar mini attraction sees you racing around the streets of LA with the Fast and the Furious gang.

They’re small parts of the 60 minute tour, and together with displays of some of the most famous cars from films, the crashed airliner set from 2005’s War of the Worlds and a recreation of the Bates Motel (complete with Norman emerging from a room with a body enshrouded in a sheet), it’s inspiring, educational and entertaining all at once.