Skip to content
February 15, 2003 in Filmink See more stories from this title 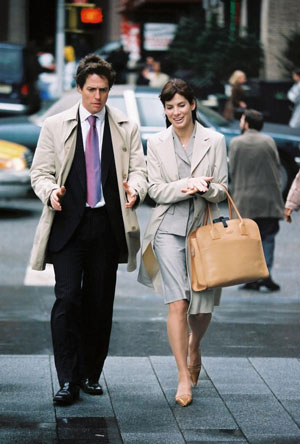 For the best look at gender politics and society in our contemporary cultural landscape, there’s no need to look at films that deliberately set out to confront those issues like Baise Moi or Natural Born Killers.

That quintessential Hollywood fixture, the romantic comedy (rom-com) contains all the material we need to understand our place in society no matter what our aspirations, gender or political leanings.

And the recent Two Weeks Notice (starring and produced by Sandra Bullock) is a poignant example.

The Evolution of Film Fantasy

First, we need to understand how the rom-com is such an effective conduit to sociological understanding. The reason lies in the success of modern films and film making to draw us into a fantasy world.

Since the golden years of Hollywood (when everyone thought Clark Gable, Rita Hayworth and Errol Flynn were the pinnacle of human nobility despite notorious drug, sex, political and monetary abuse that was as rampant in Hollywood then as now) movies have changed.

Today, a combination of film technology and our demands of filmed entertainment mean that people on screen increasingly act and dress the way people really do. And that realism — the power of the acting, costuming and directing crafts — has co-opted our ability to see films as fantasy.

But the fairy-story ethos upon which the Hollywood system is built hasn’t changed. Despite the realism that stays one step ahead of our notice, the hero still gets the girl (or guy), they fall in love, they get all the money, the object of their conflict is resolved, etc.

If a film is done well and the production and acting talent involved are sufficient to make us forget we’re watching a carefully devised fantasy, it’s easy to forget yourself, believe what you’re watching and sympathise with people you recognise, not faultless movie stars parading for your amusement.

So after a lifetime (or at least a puberty) of going to the movies, it doesn’t seem so ridiculous to ask ourselves — why don’t corporate bigwigs ever fall in love and give their fortunes away or save the old folks home or not fire a thousand people? It’s a theme explored as many times as any other Hollywood cliche — witness Pretty Woman.

And the answer is because we don’t realise that the power of movie realism tricks us into forgetting we’re watching a scripted, carefully planned fantasy.

In the case of Two Weeks Notice, the realism is testament to the acting prowess of Sandra Bullock (Lucy) in particular — who does a great job of using her face, voice and body to convey emotions — and to the chemistry between her and Hugh Grant (George). Because whatever you think of the story, the acting and execution were undeniably of the highest quality.

We meet Lucy when she’s a hippie-style social justice advocate, a professional protester and troublemaker. Seemingly a spinster, she’s smart (a college educated lawyer), a scruffy dresser and stubborn. The film’s surreptitious message is laid down straight away — Lucy is not the sort of girl men fall in love with.

But by the fairytale ending (when she dashes into George’s arms to declare her love and kiss him), everything ‘bad’ about Lucy is ‘redeemed’.

By this time we’ve seen Lucy preened and dressed beautifully (like a ‘real’ woman). She’s also questioned her beliefs and convictions at the urging of other, more ‘normal’ women with ‘normal’ concerns (and George himself on several occasions).

And lastly, Lucy has seen the ‘error’ of her ways and apologised for being stubborn and demanding — after a lecture by George because he thinks that’s why she can’t hold on to a boyfriend.

Amid the happy ending climax, George himself tells her he’s resigned from his multinational profit-driven property company and thus renounced his evil ways. There is however, the careful insertion of a joke that they’ll have to ‘share a helicopter with another family’ (because they’ll only be sort of rich now, not filthy rich).

The message to girls everywhere is clear — don’t be too stubborn, too convicted or rock the boat too much (just enough to hedge your cute factor). Be as beautiful as you can be and dress to impress men (if only every now and then).

Be a real woman, an accepted kind of woman, not the kind of girl society (and boys) find it hard to like — and you’ll be rewarded with the girly fairy tale of the riches and handsome prince you used to believe in.

But this isn’t a militant feminist viewpoint and the politics aren’t totally maligned — the human desire for love, togetherness and romance is as important as it is strong. Plenty of us (men and women) can see the value in dressing up and being attractive to impress the opposite sex, and the importance of having a lover in your life.

But to the careless tripped up by the realism, the Hollywood morals shout loud and clear — love can solve all your problems, beauty is to be pursued above justice and fitting established gender stereotypes will make people like you and want you.