Skip to content
March 5, 2012 in The West Australian See more stories from this title 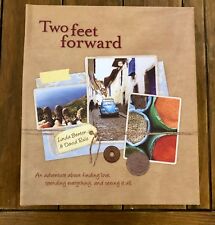 What are your dreams? Want to fall in love? See the world? Write a book one day? What if you could not only do all three but they all came wrapped up in the same big adventure?

That’s what Sydney-born graphic designer Linda Benton did, and the story of her life over the last few years reads like the stuff of romance fiction itself. After meeting the brother of a good friend at a party and agreeing to meet at a café to talk about their respective job redundancies, the 30 year old felt the kind of magic many of us spend our lives waiting for. “I’m a bit of a hopeless romantic and I believe when you get that feeling that I had that day in the café with David, it was something really special,” she says of their first official meeting, a coffee date that went for three hours.

After spending more time with finance accountant David Rule, the roots of the second dream come true for Benton when the pair got talking about traveling. Rather than settle and try and re-enter the job market Linda raised the possibility of jetting off on a world adventure, and the rest is history. “After two weeks off knowing each other we decided to go around the world together,” she laughs. “And within three months of being together we planned the first leg of the adventure. We packed or sold our stuff or stored it with family and friends and we were on a plane to Argentina.”

No doubt wondering how much more perfect life could get, Benton and Rule were overlooking the famous Peruvian lost city of Machu Picchu when David suggested exploring a little on their own. “He started to take his bag and hat off an put everything on the ground and I realised that over the previous few days when he’d been supposedly sorting out problems exchanging money he’d been looking for a ring,” Benton says, clearly carrying a very special memory as she tells the story. “He got down on one knee and proposed right there with a view of the Andes and Machu Picchu in the background.”

Altogether, the couple traveled to South and North America, the UK, the Balkans, Europe and Japan and collected so many tales – from finding a unspoiled private apartment in Dubrovnik to getting shot at in Chicago – the next logical step was to share it all.

“We picked up so many fantastic stories in those early weeks we thought it’d be great to write about them,” Benton remembers. “Neither of us had any publishing experience but I was a fairly good designer and we could both write. All throughout the trip we were thinking we might give it a go when we got home and when we arrived back the circumstances made it happen.”

The result is Two Feet Forward, a marketing and publishing venture that includes a website, a collection of notes, recipes from the pairs’ travels, inspiring photography and the cornerstone – a self published hardcover book that puts the coffee table books of many of the major publishers to shame. Every page is a lovingly crafted collection of typography, rustic and charming background images, holiday snaps, inspiring stories and recipes the pair collected from the four corners of the world.

Benton and Rule wrote, photographed, designed and managed the printing, assembly and production of the book and have self distributed it through bookshops around the country and through the website from their NSW Hunter Valley home.

Now, Benton’s discovering the brutal truth about publishing a book that she’d always heard is true – the real work starts when you put it on sale. “It’s a full time venture,” she says. “When we wrote it we didn’t realise how much work would be involved in marketing and promoting it once the book was born. So this is my full time job now and David’s the breadwinner.”

Benton says she’d be very interested if one of the big publishers came knocking and she’s already had ideas for future titles based on trips around Australia or Africa. While the marketing and distribution support would no doubt be welcome for the authors, in this case creative control over the product is already in assured hands.