Skip to content
August 30, 2005 in The West Australian See more stories from this title 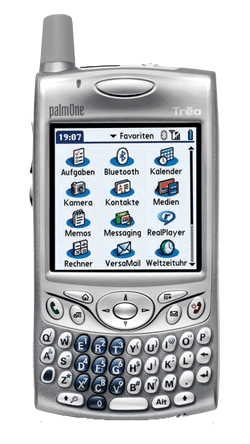 Is the PDA dead? If the laws of convergence and market forces are the yardstick by which technologies live and die, it may well be.It’s stayed more or less in the same niche positions since it first appeared on the scene; the tool of choice for the road warrior executive or strapped to the aprons of waiters in trendy eateries.

The mobile phone, by comparison, is the 21st century television; whether you’re a downshifted pensioner, an 11 year old Eminem fan or the CEO of Mobil Oil, you’re just weird if you don’t have one.

So it made perfect sense for the PDA and mobile phone to generate offspring — they’re similarly sized, and use many of the same tactile functions we’re used to.

And as the progenitor of the PDA movement, Palm may have the best chance to own the future if the smartphone (combined phones/PDA) relegates is parents to the nostalgia bin of history.

For a little over a thousand dollars, the Treo 650 gives you a lot to play with. It’s an easy step up from any other Palm product because they ship their own operating system on all their hardware.

It’s being pushed as something of a media centre, and once you load the accompanying software on your computer you’ll be transferring photos, videos and MP3s to it with the greatest of ease (although not many, owing to the 22Mb disk).

It’s very comfortable to play with and use, with a brighter and sharper screen than the ‘LCD game’ screens of older PDAs, and it’s just the right size in almost every respect. While mobile phones are still shrinking to ridiculous sizes, the Treo is about as small as you’d want in a PDA and as big as you’d want when you hold it up to your ear. The matt metallic case and sleek screen pointer are smart looking and the only downside is that — especially with the big screen — it feels a tad on the fragile side.

The 5 x 2 centimetres keyboard is a little tricky but if you can use your nails you’ll pick it up in no time. And you’ll use it often if you’re any kind of technophile (which you probably are if you bought it in the first place).

Email, voicemail, messaging, and web browsing are just some of the applications that come with the Palm OS, and while some feel a little pie-in-the-sky (web browsing on a mobile is a cute idea but has a long way to go before it shows any legs in Australia), they’ll have your fingers racing over the tiny keys.

It’s a geek’s dream, but the smartphone will invariably follow in the footsteps of the microwave oven and personal computer — a cute new toy to the generation that sees its early stumbling steps, only to become essential when it matures for future users. At the moment, the Treo 650 is helping drive the tides of change.