Skip to content
October 12, 2015 in GQ See more stories from this title 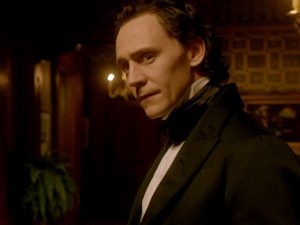 With streamlined features, ‘that’ voice (if you haven’t heard his impression of The Jungle Book’s Shere Kahn, do it now; and an Eton education, Tom Hiddleston seems every inch the classically trained British actor in the Gielgud tradition. Yes he has played Shakespeare and yes he has won the prestigious Olivier award.

How ironic then that the 34-year-old Londoner is most recognised for that brashest of American entertainment institutions, the superhero movie. He even bulked up to audition for the role of Thor (Chris Hemsworth) before director Kenneth Brannagh assigned him to the subtler part of Thor’s evil brother Loki.

As a result he’s now just as much a hero to armies of convention-going fanboys as he is to serious cineastes, and he’s using his comic book clout to expand his horizons exponentially. Early glimpses and the trailer for I Saw the Light bode well for his role as country music legend Hank Williams.

But eyes front – he goes gothic in Guillermo Del Toro’s supernatural love story, Crimson Peak. We sat down to ask him ‘why?’