Skip to content
March 17, 2015 in TimeOut See more stories from this title 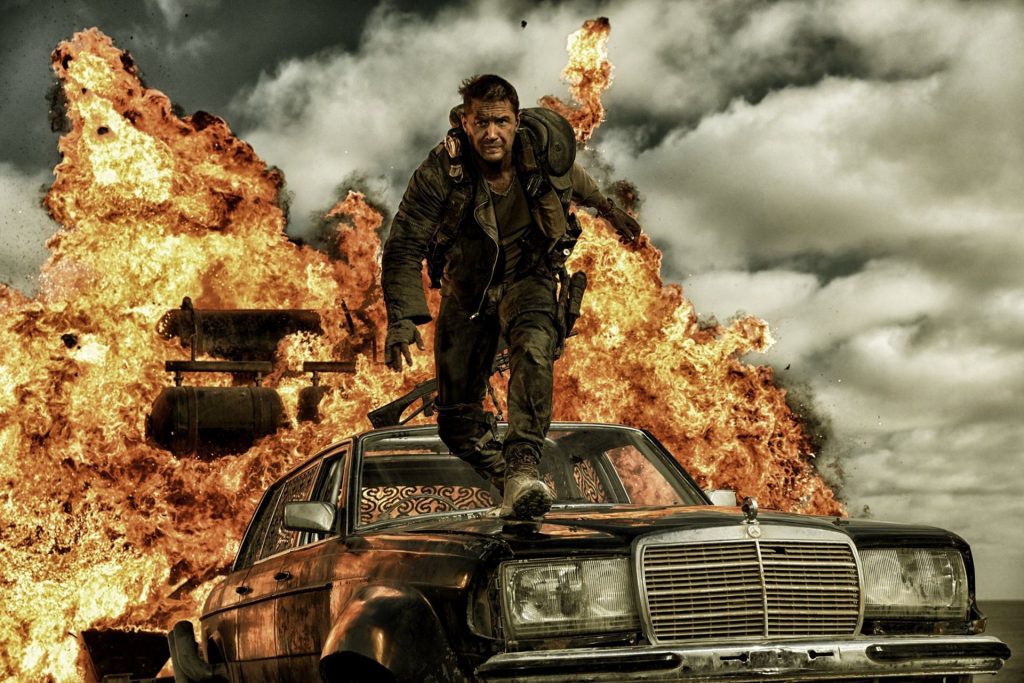 Any stories relating to your memory of the original film?

By the time I was 15, 16, 17 I got a dog called Mad Max, a black dog, a cross-labrador. He was a brilliant dog and he died the year I made Mad Max. So long story short I’ve got a dog, so did Mad Max, it all made sense to me. There’s a certain linear coincidence to how I felt.

Did that convince you to play the part?

No, I don’t think it was until I was playing Max, then of course the focus shifted and you do the research. That’s when I studied Mad Max.

So I knew of it but I didn’t connect with it. In fact I was spooked out by it at the time. I remember feeling the same way when I first listened to Jimi Hendrix, I was like ‘oh that’s a bit heavy’. I listened to him on a tinny stereo, it was quite alarming for a 9 year old, it’s a lot to understand.

We’ve heard George Miller didn’t shoot traditionally, without even a locked script beyond ideas in his head.

It wasn’t orthodox by any means. There was a call sheet and a schedule and we had to make the schedule and had six months to eight months to shoot it. It was wild because it changed every day and at the same time he had to articulate his vision.

Looking back, having seen the movie, I can see that. I mean I knew it was a mountain to climb when I got involved in it. George had such a weight on his shoulders, a brilliant weight of imagination that he transmuted to reality and the vision which he devised of getting it from in here to out there. Well, I had no idea what was really going on in his head.

Now you’ve been through it and seen the final product did that approach make sense?

Now I’ve seen it, I don’t think it was possible for him to explain it with a script. He was carrying around a very big, very ambitious property and a virtual landscape which I haven’t seen the likes of for a very long time. It’s such an extravaganza and explosion of colours. Every single car is a character to George, every single wheel is a meaningful prop.

If he could do a count for every grain of sand that flew through the window, he would have it do the same thing the same way again, he’d label it and bring it back because that was a very good piece of sand. He would probably stay up all night thinking about how to recreate that. There was nothing unaccounted for.

Tell us how you interpreted the character of Max according to that?

He’s just a man that really wants to get home, so I always wanted to play him as a slightly older man in a car that’s just had enough, just wants to go home and sit down with his dog and watch the telly. But he hasn’t got a home and he hasn’t got a telly and he doesn’t have a dog. He doesn’t have anything, there’s nothing but silence, pain and destruction. So you’ve got somebody who hasn’t spoken for an awful long time. This is a hermit, a reduced man.

He’s a super hero that hurts. I don’t know if I can jump six foot from a moving vehicle to another one, and when I get there it isn’t over because there’s some dude still chasing me. But once I land I’m going to bang my teeth and hurt my toes and then I’m going to climb up this metal and then there’s sand in my eyes and it’s rubbish and I don’t want to be there.

Makes him sound like more of a victim than in the original films.

I wouldn’t say he’s a victim necessarily. Yes, it’s a big franchise movie but what’s underpinning it is a very deep mythology and a world has been created with a huge amount of due diligence and care that you couldn’t just play one note.

Sometimes he is a victim. You have somebody who’s genuinely in a nihilistic environment. In the face of having a certain amount of humanity still within him, which he begrudges, he is trying to survive on a day to day basis. It’s somebody who is not a victim, he’s staying. What for? We’re not quite sure about that.

How about what you stayed for? Were you dreaming of a clean shower or ice cold drink the whole time?

The price I paid was just the price of admission to do anything at a high level. You have to get in and do what’s asked of you and change your comfort zone. A lot of these things are new experiences, just like any experience when you step into something you don’t know.

How did you cope with being outside your comfort zone so much?

Just do it. I was on a learning curve for which I wasn’t qualified, so I was learning as well as growing but not aware of the growth, just the learning part and trying to keep up, coping with the plethora of challenges that went on.

Were the stunts part of that learning curve?

You don’t get that much of that kind of work any more. It’s not like Hong Kong karate and wire work, this is heavy metal in the baking sun, blunt traumas and car crashes, cars running over spikes. Everything is metal and skin and wires. It’s very sweaty and hot. We’re getting wrenched up in the air and thrown about and smashed against metal, day in, day out for six months. The bikes got battered. We had a lad come off one of those. We had another underneath the wheels.

Sounds like a dangerous shoot. Was it just because you all wanted to go above and beyond?

There was a bloke trying to spin a car and beat the James Bond spin and got really upset that he didn’t. But we were just really grateful he didn’t break his neck. Full credit to them because without them you couldn’t do that movie. You wouldn’t have those cars driven at that speed, you wouldn’t have them flipping over.

Because of the effects boys, the hands-on guys and the whole team, the design elements, costumes, it’s just a fantastic, dynamic ensemble. I mean as a visual escapade it’s right out there with all the super hero movies but it’s completely a variation from the super hero movie. It’s 30 years old, it’s a classic. And it’s by the man who invented it. So it’s just full on. You got to see it.