Skip to content
March 5, 2012 in Moviehole See more stories from this title 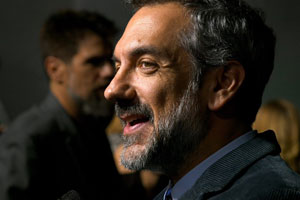 After The Hangover and its sequel cleaned up at the box office, director Todd Phillips virtually owns the drunken debauched comedy genre. An accomplished producer of his own films, he steps away from the camera to help first-time director Nima Nourizadeh bring his found footage party comedy Project X to the screen.

At the Los Angeles press roundtable, the pair talk about comedy, teenagers, and how comedy is cheap.

Has the found footage genre been good for the industry for unknown actors getting a start?

Todd Phillips: Movies doing well is always good for the industry. I don’t know that the found footage thing is in itself good for the industry. It’s timely though, people get used to watching stuff on YouTube and sending clips to each other. But you’re right that it lends itself to discovering new talent which is an interesting thing because by the nature of the thing the actors can’t be recognisable.

Have you ever wanted to cast unknowns and had resistance because the studio wanted established stars?

You get that in every movie. When it came to The Hangover people at the studio didn’t know who Zach [Galifianakis] was, but if you can do it for a good price usually you can change their minds. But what’s great about this film is that it really was an ultra-low budget comedy and from the very start of the idea it was about discovering new talent. So that conversation about doing some cameo with a big comedy star never came up because it doesn’t lend itself to that.

Todd: Yeah, someone super cheap. No, that part of why it’s great, discovering talent behind the camera as well and giving somebody the opportunity to make their first film. Ivan Reitman did it for me with Road Trip and it was a similar vibe here with Nima so it was exciting to do that.

How much did the film change from the first draft to the final cut?

Todd: From the very first draft it probably changed a lot, like all movies do.

Nima: Yeah, I think as we started developing it, we hadn’t quite grasped the approach yet. And not only that but I think so much more comedy was brought to it. We just had a cool idea, a cool structure and the characters became more real and situations got more outrageous.

Todd: Also when you cast actors and try them on the screen, it starts informing the writing as you go. On every movie I’ve ever done the minimum drafts we did was literally 15. I was watching a documentary of Animal House the other day on TV and they said the final draft they shot was the 18th draft, and I thought ‘that sounds about right’.

Where do you see this movie fitting into the history of teen high school party movies?

Todd: To me the best thing you can say about this movie is that it’s this generation’s Risky Business, in a way. That was done in the 80s as a regular studio comedy and it was wonderfully done, one of my favourite comedies. But Project X is more like doing the raw version. So I don’t know where it fits in the pantheon of movies but hopefully it does so nicely. It belongs, but it definitely has its own style I hope makes it stand out.

Nima, was that your mandate, to play with the documentary format, use multiple angles and not polish the sound too much?

Nima: Yeah, we didn’t want to be too rigid with that whole documentary approach but there’s definitely a set of rules that we tried to stick to. And I always love the idea of the footage just evolving a little bit throughout the film and getting more angles.

One example is the use of cell phone cameras. We start off with this one perspective from [cameraman] Dax and then as the party grows and more people arrive you have kids with their flip cameras and their cell phones, the police dash cams the chopper footage, the reporters. I thought that was such a cool way of telling the story, jumping around and seeing it from different perspectives. So the approach gets wilder along with the content.

Even in the beginning though you were able to keep it a little rough around the edges.

Nima: Yeah, and I think we established an editing style quite early on that didn’t feel strange to our overall concept.

Todd: And just look at The Office, people have gotten used to that style. What is this? What are we actually watching? Is a documentary being made? When is this documentary going to air? We have a lot of footage now, you know what I mean? But that documentary style of telling a story is an interesting thing, it’s an interesting storytelling language that I think helps a movie like this.

Is it true the movie is called Project X because you didn’t have a title?

Todd: No, we actually chose that. Within our company we called this thing Project X jokingly, mainly because it was experimental. And then it stuck. We just liked it.

Todd, You’ve become known for the drunkenness and debauchery in your films. Any concerns about being known as the party/alcohol/drugs guy?

Todd: No. If you put it like that it sounds very cool actually.

How much footage didn’t make it into the film that we’ll in different DVD versions?

Todd: What’s amazing is again we shot with so many cameras and angles and scenes that a lot that didn’t make into the movie. But people always ask ‘what’s the great stuff that’s not in the movie?’ If it’s great stuff I promise we’ve put it in the movie. We’re not going ‘this is too funny for the movie. Hold it back and just wait till the DVD’.

Anything the studio said no to you putting in the film?

Todd: No. Quite honestly since the Hangover films they trust the taste – actually ‘taste’ is probably the wrong word – they trust the line we draw. So we drew it ourselves and I don’t think there’s anything we had to cut out even for an R rating. There’s nothing we really had to compromise on in this film.

Could Project X have the same effect if it were shot in a more standard format?

Nima: I think that was the biggest draw for making this movie, we just hadn’t seen a teen comedy at a party with sound footage. We’ve seen so many party movies, so many teen high school movies. This level of realism resonates with the kids and I think they’ll feel closer to something like this

We’ve heard you have deals for The Hangover 3 and everybody’s being paid well after the success of the first two. Do you have to keep the rest of the budget down to compensate for that?

Todd: Comedies are just never that expensive. In an average studio movie you’re shooting effects and green screens and all these things that we just don’t do in a comedy.

How did you process the backlash you faced from The Hangover Part II?

Todd: It’s cheesy to say this but you just can’t find a comedy director who makes movies for critics. When a movie does $580 million worldwide it proves that people are enjoying the experience. And yes, maybe Roger Ebert didn’t love it, but we didn’t make it for that person. We made it for an audience and you don’t sell that many movie tickets with people hating your movie. So I’m very proud of the movie.

I think we got a little bit knocked around because critics dismissed the idea and said ‘they just copied and pasted the first movie and replaced the location with Bangkok’. But what we did was a well thought out execution of a second story. And we’ll do a third one and people will like it or not, critics maybe not but I think audiences will love it.