Skip to content
October 23, 2015 in Moviehole See more stories from this title 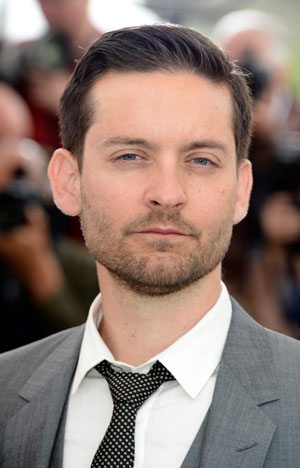 After roles in off-centre films from Ang Lee’s The Ice Storm, Woody Allen’s Deconstructing Harry and Terry Gilliam’s Fear and Loathing in Las Vegas, Tobey Maguire established himself at a very young age as a decidedly indie player.

He never looked entirely comfortable in a high profile superhero blockbuster as Peter Parker/Spider-man, mixing Sam Raimi’s original trilogy in with more grown-up roles in Seabiscuit and The Good German – and the poorly received third film seemed to put the final nail in any A-list multiplex career aspirations Maguire might have had.

Between then and now he’s only appeared in one or two high profile films (including Baz Luhrmann’s The Great Gatsby), but he’s been prolific on the other side of the camera, producing films as diverse as Rock of Ages and Z For Zachariah.

For the first time in the story of chess prodigy Bobby Fischer, he combines acting and producing, and the result is the quietest war movie you’ve ever seen. Maguire spoke to Moviehole.net in Los Angeles.

What led you to Pawn Sacrifice?

It came about because [producer] Gail Katz asked me if I was interested in doing a project about Bobby Fischer and I didn’t know a whole lot about him at the time. I knew he was a great chess player and some sense that he had a difficult personality. I discovered some things that gave me pause about him, some things he said later in his life that are awful.

The story is quite fascinating, in particular the time we focus on in the film where he was this really difficult, fragile, paranoid guy in this tense political climate. Basically, you have a sports movie structure with this character set in the center versus a kind of front-to-back biopic.

I thought that was the way to go and I wanted to layer in as much about Bobby Fischer’s character as possible within that story.

It’s a little bit the story of how to handle fame. How have you done that?

I’m not wearing a paper bag.

Oh, he did do that didn’t he? Wow, no that’s his move, then. I’m going to let him keep that one. I gotta figure out a new move.

I’m not sure, I didn’t take any tips from Bobby about his reaction to it. Look, it can be kind of jarring. Certainly in my own life I understood that you’re likely to get famous when you do movies at a certain level but it didn’t quite prepare me for what that meant in my day to day life.

Like anything in life, something comes at you and you try to understand it and make adjustments to make it tolerable and even positive if possible. Bobby, I don’t think, spent a lot of time learning or growing past certain things socially. He really was focused on chess and was very anti-social.

You have a lot more projects these days as a producer than an actor. Does that say something about the quality of scripts that are around now?

That’s a lot of different factors that have to line up. I’m fairly particular so I might sit around for a year and a half before somebody sends me anything I want to do. I just want to be busy working and have a creative outlet.

That’s the reactive side of it, but mostly I just enjoy being in conversation with creative people and trying to build stories and make movies happen.

Talk about the chess matches with Liev Schreiber, it’s all in your faces and eyes.

It’s something that [director] Ed Zwick and I talked about quite a bit, how do you dramatise games of chess and make them engaging for anybody who might be watching it? We knew it was largely going to be silent.

It’s actually interesting if you know the stories of the people coming into the match and you know what’s at stake for them. Even though sometimes you’re not even sure what they’re doing with the pieces, if you don’t know about chess, then it’s done cinematically in expressions or somebody whispering to somebody to help us understand what just happened. So we’re employing all of these different tactics to try to engage an audience without having to understand anything about chess.

Are you an okay chess player or did you become one for the role?

I learned through this movie that I am not a good chess player. I’m good enough to not play, I know enough about it to not play it.

It’d take me years of playing every day for hours a day to be any good, as well as study and reading, so somewhere in there I determined I wasn’t going to pursue that.

How did you research and discover Bobby as a character?

I watched everything, I listened to everything that existed or that I could find. I talked to anybody who would speak to me that knew Bobby. I read several books and articles on him and throughout the whole process would listen to Bobby or watch him and just immersed myself in it.

You’re a great poker player, how similar is it to chess?

[Laughs] I always wonder when people say things like ‘you’re a great…’ you’re like ‘Do I debate that or do I just accept when people call me great?’ Over the course of a lifetime there’s some myth that I’m great at many things.

It doesn’t hurt. It’s very different, and I think Bobby himself hated games if there was any element of chance, whether it was cards or dice or something like that he’d get really frustrated because his skill might gain him an advantage but the chance element might take that advantage away and he almost felt that was unfair. He only wanted to play strictly skill-based game where he had control and the communication is very pure.

It doesn’t hurt that I’ve played games and battled with people across boards and felt tables.