Skip to content
September 21, 2009 in Desktop See more stories from this title 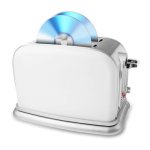 By the time Roxio Toast 9 arrived we’d given up on the media browser, Toast Titanium’s small separate palette that lets you scroll through music, photo and media content. But a new feature in version 10 has given it a handy new lease on life. Seen a clip on the web you want to download for your media player or mp3 player? As long as it’s in a supported format (and we searched far, wide and fruitlessly to find one that wasn’t) each video you view on the web is saved in your media browser for burning or resaving as you would any other content in Toast.

That’s just one example of how Toast does a great job of evolving, in this case by making the capture of online content easy. You can do a similar thing with audio using the Spin Doctor utility that comes with the program, which extracts title and artist metadata and sends it all to iTunes as mp3 files.

Another new feature promised was the extraction of short clips from any DVD-Video disc but whether it was a copy protection issue on the discs Desktop tried, we had trouble getting it to work. If you’re a camcorder user, Toast also now comes with the ability to extract and archive AVCHD formatted footage straight from your device.

Audiobook CDs copied to your iPod doesn’t sound like a big deal — surely it’s just copying from one place to another — but if you do it through Toast iTunes maintains the chapter breaks, making scrolling through audiobook content easy once you load it onto your player.

The application window is still sorted into five areas (data, audio, video, copy and convert) and as before there’s a slight sense Toast is getting too overloaded with features. It’s a little like a mobile phone in that you won’t even use 90 percent of the functionality. If you’re as interested the repurposing of media content as Toast 10 allows you to be you’ll most likely have the tools to do everything it offers elsewhere. To make matters worse, the documentation is still inadequate and we couldn’t even find instructions for some of the features that looked cool.

Thankfully it has a long history of being a plain disc burning application, as synonymous with putting stuff onto CDs from a Mac as Google is to search. You probably won’t need any more convincing to buy it if it’s what you’ve used for the better part of 15 years, and even if that’s all you use it for, few tools do it better.