Skip to content
July 30, 2013 in SFX See more stories from this title 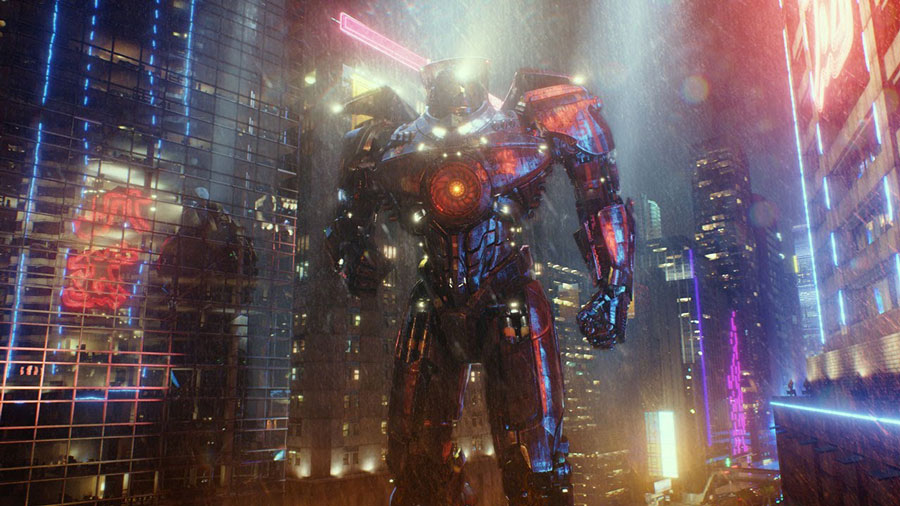 Guillermo Del Toro is nowhere to be seen.

He’s under a large marquee with his monitors and assistant directors, keeping the rain off. The only reason SFX knows he’s there is because every time the vast shot before us is performed, he orders the trucks backed up, the soldiers back across the floor and actors Charlie Day (Horrible Bosses) and Burn Gorman (The Dark Knight Rises) back to their original mark escorting a sci-fi inspired cart that seems to carry alien remains.

Everything’s set again, and Del Toro’s voice booms ‘action’ from somewhere. In fact it might not even be him, but some second unit director. There are so many people, vehicles, weapons and cool sci-fi equipment everywhere it’s hard to make head or tail of anything.

And yes, we did say rain. Even though SFX is indoors, two guys standing not far off are holding fire hoses, sending thousands of litres of recycled water across the whole scene to simulate a downpour.

We try not to worry about the heavy electrical cables snaking back and forth in the inch or two of water we’re standing in and get down to the business of the scene in front of us. It’s the moment just before resistance officer Stacker Pentecost (Idris Elba – Prometheus, Thor, The Wire) meets Jaeger pilot Mako Mori (Rinko Kikuchi – Babel, Norwegian Wood).

As Pentecost, Elba plays the no-nonsense resistance leader who has to wrangle humanity’s last hope for survival when kaiju – monstrous creatures the size of skyscrapers (see below for the SFX kaiju primer) – ascend from the depth of the Pacific Ocean to attack.

As Mori, Kikuchi is one of the final pilots qualified to drive the Jaegers along with Raleigh Becket (Charlie Hunnam). The Jaegers are giant fighting robots the size of the kaijus – think of the fighting machines in the seminal anime franchises such as Mobile Suit: Gundam.

Giant robots battling giant monsters is virgin territory for Del Toro, but even the first trailer makes it look like the standout sci-fi film of 2013.

The reason the man himself might be hard to spot here on set is because he’s been hard to pin down of late. After a long hiatus from screens following 2006’s Hellboy II: The Golden Army, passion projects fell over one after the other, including his directorial appointment on The Hobbit and In The Mountains of Madness.

But after consulting to, producing and writing a slew of movies in 2012, he’s back behind the megaphone, and even though he’s been working six day weeks (and spending most of his days off on the set overseeing the second unit) Del Toro doesn’t show an ounce of the strain when he finally walks over to chat. It’s apparent he loves talking about kaiju, monsters and movies and how much his favourite subjects bring him to life (‘Maybe that’s why actors want to work with him’, star Charlie Hunnam said earlier).

“When I was a kid in the 60s, for whatever reason Mexico was entirely permeated by Japanese anime, kaiju movies and Japanese horror,” Del Toro begins, explaining his love of the genre. “Lake of Dracula, Gamera, Astroboy, we got everything.

Befitting a movie about big characters, Warner Bros have taken a correspondingly big approach. Its panel featured the most jaw-dropping presentation of 2012’s Comic Con as Del Toro introduced footage from Pacific Rim on three enormous screens. The crowd and blogosphere went crazy and the movie became the biggest news of the con.

Although he’s described Pacific Rim as a ‘clash of forces’, Del Toro points out that he doesn’t consider the kaiju to be truly monsters – another classic nod to the genre. “What I wanted to have is brute force,” he explains. “The kaijus are essentially living weapons, they’re single minded. I wanted to represent the kaiju as a force of nature that’s unstoppable, directional and goes for what it needs.”

Then Del Toro truly lights up, and he unwittingly reduces the entire gathering to giddy ten year olds. We’ve all – as he says – grabbed out toy robots and toy monsters and made them fight, imagining how cool it would look for real. How many of us get the chance to direct a movie and bring that childhood dream to reality?

“It’s not particularly any character’s point of view but the movie is essentially what I dreamt – that dream you have as a kid that no movie ever fully provides – of would it be like to be seeing that.”

Of course, it’s almost a given a Guillermo Del Toro movie won’t rest of lazy character tropes, the humans mere fodder to shunt the audience from one explosion to the next. Producer Mary Parent agrees the film couldn’t have found a better steward. “Look at his body of work,” she says. “You see plenty of movies with incredible visuals and don’t care about the characters, or where you care about the characters but not the visuals. Guillermo does it all.”

So after being known for smaller, more intimate fantasy dramas (even Hellboy II was shot for a modest $80m), this is what Del Toro can do with serious Hollywood moolah. It’s perhaps fitting he’s shooting here, on the 45,900 square foot Megastage of Pinewood’s Toronto studios (think of an indoor football pitch).

With a 103-day main shoot that started in November 2011 and 17,000 visual effects shots, Pacific Rim itself is something of a monster. The kaiju and Jaeger battles take place in San Francisco, Hong Kong, Sydney and Tokyo and SFX was shown around the sets that had overtaken several of Pinewood’s sound stages, from the interchangeable Jaeger cockpits to the apocathery (the secret back room of a restaurant that deals in contraband kaiju organ tissues) and the underground subway, complete with a giant foot-sized hole in the roof and rubble everywhere.

We’ve already been shown the 20 second sizzle reel, the audition clip put together by Industrial Light and Magic to pitch for the work. It’s a less-than-polished animatic that nevertheless raises the hairs on the back of one’s neck, and it sold Del Toro on ILM’s ability to bring the building-sized characters to life.

So even though we’re surrounded by real-world (and very realistic) looking sets – particularly the rusty metalwork, otherworldly military transport vehicles and fake rain of the landing pad – 40 percent of the budget has gone into VFX.

That begs the natural question of just how much this all cost, but Parent won’t talk (‘it’s not an expensive as one might think’ is all she says). What she does say is that it’s a lot of work.

“We’re shooting six days a week,” she says. “Guillermo wants to shoot every frame. I’m sure when second units go in he’s got monitors set up so he can watch what’s happening. We actually switched the unit schedule so he could oversee more of the second unit shoots. But that’s what I mean, like any other great filmmaker he’s obsessed with the smallest details. He just can’t let go.”

Even more so than themes of innocence lost and alliances formed to fight off peril, if there’s one thing we can expect from a Guillermo Del Toro movie, it’s some of the most brilliant design on screens, and the rich history he had to work with was just the jumping off point.

The design of the jaegers – humanoid robots that walk, punch and shoot, was even more organic, the young Del Toro unwittingly laying the groundwork for his 48-year-old self years ago.

“When I was a child I would draw a robot, including the inside, just like I’d draw monsters and their intestines. But I’d draw the inside and say ‘this is where I’m going to sleep, this is the ladder to the kitchen’. I’d enter through the toe and the elevator would go through the leg. We designed the robots like that. In between every fissure of the outer surface you can see a very intricate, reality-based structure.”

So far, the months of drawing, concepting and obsessing over every detail look like they’re paying off. As this self-described workaholic says a good-natured goodbye and walks back towards the artificial rainstorm, he grins like a kid going to see a cool movie, not an exhausted adult going back to work.

When SFX later asks producer Mary Parent what the biggest challenge of the shoot has been, she smiles wryly and doesn’t hesitate. “Biggest challenge?” she says. “Keeping up with Guillermo.”

Charlie who? TV watchers know him and Pacific Rim co-star Ron Perlman from Sons of Anarchy, but this Newcastle native will be on the movie radar in a big way from now on.

Tell us about the character of Raleigh Beckett.

He’s young and full of the bravado at the beginning of his career and doing very well, but he disobeys an order that gets his co-pilot brother killed and gets kicked off the force. The journey for Raleigh is of slowly making up for that terrible mistake.

Did you have to audition?

No, Guillermo’s known me for a number of years. He looked at me for the role of the prince in Hellboy 2 [which went to Luke Goss], and I guess he kept me in the back of his mind.

He was going to offer me a role in The Hobbit before directing that fell through, so maybe this was the one for us to do together. He called me before there was a script, and it’s the first time I’ve signed on to a project without reading the script or even seeing who the character is.

Wasn’t that a bit risky?

I’m at the point where it’s looking more realistic that I have a shot working with my favourite directors. It’s really just about the director for me. I used to be very motivated by material. If the script was fantastic I’d go for it even if I had some reservations about a director.

But I’ve learnt my lesson with that. However good a script is, if it’s a director whose films didn’t reach their full potential your movie probably won’t either. So now I’m just trying to work with the directors I really admire and respect.

Japanese animated monsters inexplicably played big on Mexican TV in the 60s, and influenced a future Hollywood player. Here’s what Del Toro knows that you should too.

* The literal English translation of the Japanese word ‘kaiju’ is ‘strange beast’, but in modern parlance, it’s a giant monster on film, typically one that attacks a Japanese city or fights a similar creature.

* If you’re a cinephile you’re already familiar with the most famous kaiju including Gojira (Godzilla), Gamera, Mothra and Rodan.

* Kaiju are commonly the result of science gone wrong, an alien race from space or another dimension (as in the case with Pacific Rim).

* Hollywood B movie legends like Roger Corman and Ray Harryhausen were fans of kaiju movies too, resulting in a slew of cheap monster attack movies in the 50s and 60s like The Beast From 20,000 Fathoms.

* The first kaiju film might not even be Japanese. It’s widely considered to be 1925 stop motion animation dinosaur epic The Lost World, based on the story by Arthur Conan Doyle. 1933’s King Kong further galvanised popular interest in giant monsters, influencing the Japanese filmmakers who made kaiju famous.

* kaiju have a stronger legacy than you might think. They’ve cropped up everywhere from Ghostbuster’s Stay Puft Marshmallow Man and Q: The Winged Serpent to 1986 arcade game Rampage.