Skip to content
January 20, 2014 in The West Australian See more stories from this title 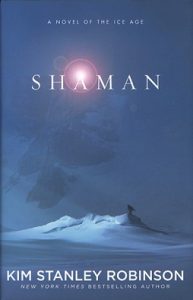 The novelist in today’s publishing market must wield several essential skills. Competent prose is a good start, emotive language will help depending on your genre, realistic dialogue can let you sidestep a lot of cliché fairly effortlessly and something readers have never seen before goes a long way.

But spare a thought for the humble science-fiction writer. Often setting tales in the future (or at least somewhere we’re not familiar with), the sci-fi artisan needs unshakable talent in another area many of their contemporaries in drama, romance or crime take for granted. While other authors tell stories in the world we know, the sci-fi author has to build a whole world and the way it works from scratch.

Not only that, he or she has to make it seem realistic according to the plot, convey detail that isn’t needless exposition, and enmesh description of it into the narrative.

One of the modern masters of such skills is Kim Stanley Robinson. The 61-year-old author is best known for almost 20 ground-breaking novels, most of them containing signature themes of social, environmental and economic risk and destruction. It’s no surprise his doctoral thesis at the University of California was on the work of Philip K Dick, another peerless world-creator who managed to issue some of the most urgent social and cultural messages of his time under sci-fi auspices.

Robinson is also one of those authors whose work has broken the banks of mere art. His Mars Trilogy (1993-1996) about the colonisation of the red planet was so realistic when it came to the technological and political systems at play, today it’s seen as a blueprint of how to (and how not to) settle Mars when we finally have the means and the will.

It wasn’t the first time Robinson’s world building skills had been on show, but many readers will forever equate him with the Mars trilogy, and with good reason. Like few others stories from the canon, Red Mars, Green Mars and Blue Mars feel like a science-literate writer travelled to the future and returned to report on what he saw rather than making it all up through research and imagination.

Before Cloud Atlas re-popularised the idea of reincarnation for a new generation, Robinson’s novel The Years of Rice and Salt sketched a breathtaking alternate history with characters endlessly reborn to meet the challenges and opportunities of a new age.

It depicts a world where Europe splutters before it starts thanks to the Black Plague, the Islamic and Asian worlds ascending to power instead. Even in a familiar place like our own world (the giant city of Kwinana, south of where Perth might have been, is an outpost of a global empire – what we know as Australia is the Chinese colony of Aozhou), Robinson’s astonishing powers of world-building take full flight.

He adds that world building takes patience on the part of both the writer and reader. “As the writer you have to convey lots of information in the flow of a story without harming its sense of propulsion. You have to trust both the novel as a form and your readers as readers, and attend to it even when it isn’t the main aspect in a particular passage.”

For his latest book Shaman, Robinson again stayed on Earth, depicting life for humanity 30,000 years ago. We have some fossil record of what life was like in Paleolithic times (a period Robinson calls a ‘baseline of what we are, or how we became what we are’) and then an important discovery in Europe convinced him how advanced people of the time really were.

“When the ice man [Otzi] was pulled out of a glacier between Italy and Austria in 1991, I was very struck by his gear,” the author explains. “It was sophisticated and it resembled the kind of gear we take mountain climbing now in purpose and design – in everything but materials.”

The final piece of Shaman fell into place when Robinson saw photos of 32,000-year-old cave paintings from France’s Chauvet cave (discovered in 1995). “I was so struck by their beauty and age I felt I had my story,” he says. “I’d tell the story of the people who painted that cave. That gave me a time in the depths of the ice age, with Neaderthals still alive, wolves about to be domesticated, a particular location and so on.”

Shaman is just the latest in one of Robinson’s epic works. Few of his novels are ‘normal’ length, usually clocking in at 6-900 pages. The sheer number of words the Illinois native has written in his fiction is staggering, and that’s just what we see on the page. Whether it’s living on Mars, extrapolating the birth of Islamic history across eons, life 300 years hence (2312) or America healing from nuclear war and industrialisation gone mad (the California Trilogy), an enormous amount of preparation and reading goes into each project.

“I definitely enjoy my research,” he says. “It’s reading with a purpose. I feel like I’m on the hunt, looking for good stories to tell, because I collect good stories from the research and retell them.”

The process often begins years in advance as Robinson collects books and weblinks that seem relevant to an idea he’s been ‘brooding on’. When starting a book, he then looks for whatever he has on hand that’s useful, but when he starts writing, the process changes to what he calls ‘iterative’. “Once I’ve written a draft of a scene I know much better what I need to know to make it better, and that directs subsequent research.”

Robinson also says it helps him avoid what he terms the ‘Coleridge Problem’ (which would make a great name for the widespread condition among people convinced they have a book in them who never getting around to starting it). “In his Biographia Literaria, Coleridge listed all the things he needed to learn before he started his epic poem like chemistry and minerology, and he never started his epic poem.”

It’s also interesting to hear Robinson talk about how many of his projects feel like they have research limits because of the finite amount of experts and literature to consider in preparation. The single unlimited project, he says, was 2002’s The Years of Rice and Salt. “As it concerned world history, it was in effect infinite. I had a bookcase (rather than a bookshelf) of source material and could never come to the end of it, which was a bit shattering for my research mind.”

As well as his unparalleled name as a sci-fi author, there’s a whole other dimension to Robinson’s work. His books are so influential and (in the case of the Mars trilogy) have become the definitive statement on an issue that a new genre was credited to him; literary sci-fi. Long the bugbear of sci-fi practitioners, it’s as if his realistic addressing of themes like environmentalism and interstellar exploration elevate the material above ‘mere’ science fiction.

But Robinson bristles at the suggestion, saying any adjective before the words ‘science fiction’ are usually attempts to box him in by people who ‘don’t like the kind of thing they’re naming’. “It’s bad for writers to get stuck with labels because it cuts down on potential readers, and pre-forms expectations,” he says. “I’ve experienced this directly and reject all those labels. The one I’ll always accept is simply ‘science fiction’, because it means something, it’s what I do.

“Writers who write science fiction but then deny it in any way irritate me, as it seems to me they’re claiming they accomplished everything they did themselves, with no help from genre or culture. It’s narcissistic and chicken-hearted.”

It also makes perfect sense to Robinson (and any dedicated science fiction reader as well, if you care to ask them) that lofty themes attracting attributions like ‘literary’, ‘feminist’ or ‘political’ have a natural home in science fiction. “The future of science, civilisation and life on Earth depend in large part on how we choose to deal with our current problems,” he says.

Of course, and as much as he hates them, such labels have given Robinson high-level recognition as an expert in fields from aerospace engineering to environmental science. It doesn’t mean NASA or Al Gore have him on speed dial, but Robinson says his contribution to world affairs is exactly what it should be. “I’m invited to take part in discussions that are more philosophical than practical, and that seems right to me.”

Literature, he believes, plays a longer game. There are two quotes he likes; ‘The one who tells the stories rules the world’ (an old native American saying he came across while researching Shaman) and ‘Poets are the unacknowledged legislators of the world’ (Percy Shelley).

“There seems to be widespread awareness of the power of art and stories in human affairs, but it’s indirect,” he says. “Writers get to make things up and speculate, and sometimes the hard work of planning needs to focus on what’s achievable in the real world at that moment. Although H G Wells wasn’t at the UN meetings that created the postwar global civilisation, in many ways they enacted the vision articulated in his utopian novels.”

After a career enjoyed by millions, just talking to the author makes you feel more intellectual, so it’s with a slight air of apology one brings up Hollywood. The classical science fiction authors generally aren’t treated well by the movies – for every Blade Runner (Philip K Dick) and 2001 (Arthur C Clarke) there are a hundred works of sci-fi eviscerated on the big screen, essential themes jettisoned in place of special effects and thrills. Just ask David Brin (The Postman) or fans of Richard Matheson (I Am Legend) how Hollywood has treated – and twisted – their work.

But the thought of a well-made cinematic rendition of some of Robinson’s work – particularly the Mars trilogy – is too exciting not to mention. Unfortunately it turns out the only thing more powerful than a best-selling author is the lawyers of development hell. “The Mars trilogy has been optioned a number of times,” Robinson says, “and there’s a good team in Hollywood working to get it made as a TV series, but that effort hasn’t been green-lit, and the process is slow.”