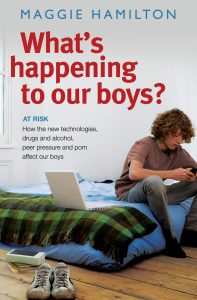 Next time you’re having trouble with the kids, spare a thought for researcher and writer Maggie Hamilton — she seeks out problems with kids for a living. In the course of her two most recent books, she’s dealt with thousands of them. With almost 20 titles to her name, Maggie tapped into a cultural zeitgeist with 2007’s What Men Don’t Talk About — a wake-up call concerning the hopes, fears, trials and tribulations facing modern men, often in lonesome silence.

Hamilton compiled and wrote both books by going straight to the source. She talked to thousands of teenagers about cyberbullying, highly sexualised advertising images and the influence and control of parents, and her diagnosis is that some kids are in serious trouble. But haven’t we been hearing this for generations, ever since kids screamed at the Beatles or fainted at the sight of Elvis’ swinging hips?

“Every generation has its challenges,” Hamilton agrees. “But we’re facing a very new landscape that is changing very quickly. The difference now is adults have very little sense of the landscape their kids are navigating. That means we can’t put any sense of boundaries in place or give cautionary, contemporary tales that enable kids to understand the consequences of certain decisions.”

According to Hamilton, it’s not simply that things are tough for kids or we don’t understand them. We all face the same problems finding our identities as we grow up. Today, kids are facing those problems at younger ages than ever before as increasingly younger demographics fall in the crosshairs of capitalism. “We talked to preschoolers who are desperately anxious about looks and possessions,” she says, “we’re facing new issues like pornography. Six, seven, eight year olds couldn’t access it in previous generations, but they can now.”

“We’re not enabling our kids. We project our fears onto them and we’re not giving them the opportunity for resilience. We have to stay up to date with technologies and the other things that are happening so we’re aware of the challenges, and that comes about by creating a culture in the home where stuff get discussed.”

Hamilton also highlights a strange parallel. Because parents are so out of the loop, kids are left so alone to deal with the myriad new issues they face. The face a rudderless future with little guidance about the disappointments and obstacles life as an adult will inevitably bring. “If we found ourselves in some sort of situation like a war on our own soil, I worry about how our kids would cope because they’ve never had to cope with anything that’s difficult.”

If Hamilton’s right, it’s urgent work — we’re not talking about a subspecies or minority here, but the people who will one day drive the whole human race. As she says; “I’m interested in how we’re going to construct the future.”