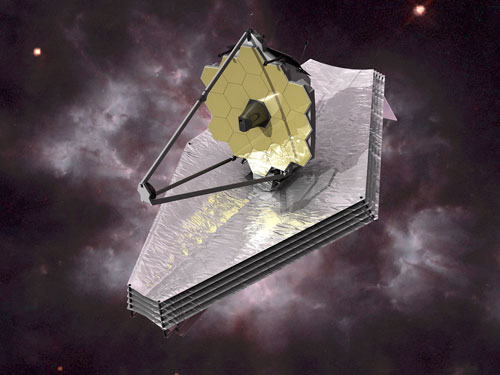 A new space-borne telescope will see farther than any man-made instrument before it, and reveal more secrets about our origins and our destiny, as DREW TURNEY reports.

As anyone with even a passing knowledge of astronomical hardware knows, space-borne telescopes far away from the light pollution and light-refracting soup of Earth’s atmosphere are the Holy Grail of figuring our universe out, and for the last few decades a single name has been synonymous with the field – Hubble.

That’s all set to change in a couple of years when a new platform is launched that will peer into space using different instruments set to different parameters than Hubble can. The James Webb Space Telescope will let scientists see further into the distance than ever, back to the epoch of the first few galaxies that formed a mere couple of hundred million years after the big bang (a tick of the clock in intergalactic terms).

James Webb, who died in 1992, was NASA’s administrator during the Apollo 11 moon landing era, and as far back as 1965 he wrote that a large telescope orbiting in space should be a priority for the US space agency. In 2021, if the joint effort meets its latest launch date, Webb’s dream will come true as the JWST rises from a launch pad in French Guiana aboard an Ariane 5 rocket.

It’s a collaboration between NASA, the ESA and the CSA (Canadian Space Agency), with NASA’s Goddard Space Flight Center developing and Northrup Grumman manufacturing, and even though it’s been through the usual bureaucratic effects of big government science (costs have gone from US$500m to almost $10bn and the planned launch has been moved almost every year since 1997), the insight the JWST will give us into our universe will be worth it.

But why is it time now? We’ve all seen those jaw-dropping images from Hubble, of galaxies just like ours that might contain trillions of advanced civilisations, scattered like so many forgotten seashells across the void?

James Webb will make Hubble look like the first prototype from Galileo’s workshop by comparison. Instead of Hubble’s near ultraviolet, visible, and near infrared spectra, THE JWST will scan lower frequencies, from long-wavelength visible light to mid-infrared, letting it see high redshift objects that are too old and far for any existing technology – never mind that we can’t even service Hubble anymore now the US space shuttle fleet has been mothballed.

Looking like an attack ship from a very friendly galactic invasion force, the JWST will be the size of a tennis court, the five layered sunshield covered in Kapton, a proprietary polyimide film that will keep infrared light and heat from the sun, moon, earth and the vehicle’s own electronics from affecting the mirrors.

The main 6.5 metre wide mirror is comprised of 18 hexagonal panels made of lightweight beryllium and covered with gold. Drive systems and actuators control each panel individually through up to six degrees of movement, position and curvature, which will let mission controllers make incredibly fine adjustments to set the directional focus.

Four main instruments are packed into the box at the back of the primary mirror. The spectrometer is the tool that lets us repurpose visible light into a spectrum that reveals properties about the chemical composition of the object. The near infrared camera is the primary visible light imager.

The Fine Guidance Sensor/Near Infrared Imager And Slitless Spectrograph (FGS/NIRISS – as always, NASA could take a leaf of Apple’s book when it comes to naming their stuff) lets the platform target an object with high precision so the instruments can stay focused on it long enough to gather as much data as possible. And the Mid-Infrared Instrument (MIRI) is the time machine that will reveal the redshifted light of distant galaxies.

The JWST will technically orbit the sun rather than the Earth. 14 days after launch from South America the secondary mirror will deploy and the whole thing will be ready for action, but it won’t reach its destination – the second Lagrangian point – until a month of flight. 1.5 million kilometres out from us, in the opposite direction of the sun, the combined gravitational pull of the Earth and sun will keep the JWST in its orbit, moving slightly faster than us so as to stay in line as it peers outward into deep space.

The underside of the sunshield facing Earth contains the solar panels, the enclosure that will hold the rolled up sunshield during launch, the spacecraft bus containing the electrical and drive systems, the antenna to communicate with us back home and more.

More sensitive by a factor of 100 than anything that’s come before – including Hubble – the JWST will end what’s been called the Dark Ages. We’ll be able to see artefacts from the reionisation period, an epoch between 500 million and a billion years after the big bang when galaxies and quasars began to coalesce and form out of the chemical soup.

Giving us a clearer view of those objects will let us compare them with more recent examples like the giant spirals and ellipses of our own home, giving us a better idea of how galaxies are born and evolve.

It will also be able to see through the giant clouds of gas and dust that normally obscure stars and planets as they form, giving us more clues into their make-up and chemical conditions like atmospheres. From there it might be a hop, step and jump to seeing the building blocks of amino acids and proteins (or whatever their local equivalent are) in action elsewhere in the universe, maybe peeling the lid off the formation of life itself.