Skip to content
October 16, 2011 in The Sydney Morning Herald See more stories from this title 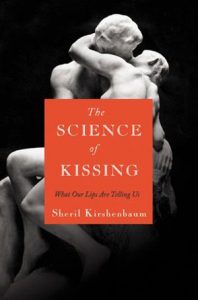 Do you remember your first kiss? Flashbacks of delicious teenage terror are a common reaction but the first time someone pressed their lips to you to convey affection was probably when you were only minutes old.

In the great span of human history, the precise origins of kissing are similarly lost in the haze of time. What we do know is that it still has the capacity to enthrall. From the Ain Sakhri lovers figurine — circa 9000BC — to William and Kate’s bridal balcony canoodle, by way of Klimt’s famous gold-leafed embrace, Britney and Madonna’s music awards lip lock and countless silver-screen smooches, this fascination with kissing is the pointy end of humanity’s curiosity about sex.

But what, exactly, is the point of puckering up?

It’s a question American researcher Sheril Kirshenbaum tackles in a new book, The Science of Kissing.

“Kissing is a wonderful example of a behavior that’s both nature and nurture,” Kirshenbaum says. “We’re born with the natural drive to be drawn to another person’s lips, but our experiences and culture influences the way connections are expressed.”

Kissing’s most obvious connection with the biological past is the fact that all mammals touch to convey their mood. In the case of the higher primates, it involves elaborate social cohesion and bonding rituals. “Monogamous Bonobos [closely related to the chimp] have detailed social rituals that include kissing,” Kirshenbaum explains, “but they still don’t have the range of homo sapiens kissing behaviours where we kiss differently for lovers than we do for parents, for example.”

The Science of Kissing also outlines a theory kissing is an echo from when mothers fed their young by partially chewing food to pass directly into the baby’s mouth, but Kirshenbaum points out that doesn’t explains the dopamine-heavy romantic thrill that comes from pressing lips to a lover.

A popular recent theory is immuno-signalling, where proximity to a sexual partner (or a potential one) provides a tsunami of subtle and unconscious cues about their suitability as a mate. Reliance on vision tends to overshadow the importance of other senses, but the scent of a member of the opposite sex plays a huge role in mate selection — particularly for women, who enjoy keener olfactory input. Way back in linguistic history, the very word ”kiss” shares roots with words describing the sense of smell.

But immuno-signalling goes further. In The Science Of Kissing, Kirshenbaum talks about the flood of genetic information unwittingly traded. “A few drops of saliva contain countless chemical genetic markers, and the immune system can analyse it very quickly and deliver a prognosis.” If it thinks the kisser has a complementary immune system and you’d likely produce healthy offspring together, it delivers the verdict as weak-kneed delight to be in the arms of such a dreamboat.

Of course, you’re swapping a lot more than your chemical immunity signature. You might be passing on anything from a cold to streptococcus, maladies that easily meant death in the millennia before modern oral hygiene.

But in evolutionary terms, the baby-making kissing facilitates outweighs any risk. “It’s not particularly dangerous compared to other activities we engage in,” Kirshenbaum says. “We typically exchange more harmful germs during a handshake. It’s a tremendously useful way to learn about compatibility and find a good genetic match. Above all, kissing promotes bonding and fosters the connections we share with those we love.”

A world without kissing

We live in a world where machinery does a lot of the work for us, and it’s no different in matchmaking. Judging partners based on online ‘profiles’ without ever meeting them is a good statistical approach, but it’s only a fraction of the story and may even be the wrong way round.

Tiny physiological signals in a million identifiers like your sense of smell, repertoire of body language and even vocal pitch seem trivial when meeting someone new, but such biological prompts make up a huge proportion of the partner-selection response. Until we can deliver such volumes of fine detail over the web, kissing will be a critical part of the puzzle.