Skip to content
May 20, 2014 in The Sydney Morning Herald See more stories from this title 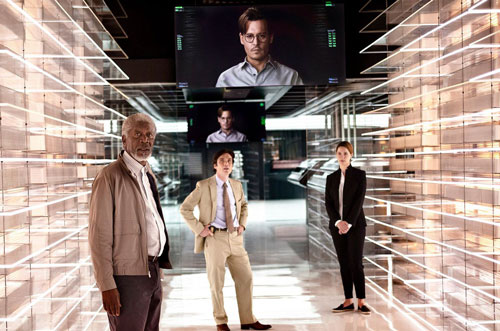 It’s been the stuff of sci-fi dreams for generations. Escape the fragile flesh by uploading your consciousness to another medium, leaving you aware and intact in a computer, robot or a completely new body.

As far back as the mid 1700s, French philosopher Denis Diderot believed the conscious mind could be deconstructed and put back together. His ideas were based on the Enlightenment-era thinking that consciousness wasn’t a disembodied soul but the product of interacting brain matter.

Since then the idea has been ripe pickings for science fiction and pop culture, from the hologram Rimmer in TV’s Red Dwarf to the movie Avatar.

The idea is explored more fully in the new movie Transcendence. Computer scientist Will Caster (Johnny Depp) is fatally injured while working to digitise consciousness and transfer it to a computer network and when his wife and colleagues realise it’s his only chance of survival, they do just that – with dark results.

But scientists are taking the idea of transferring the ‘you’ that lives inside your brain somewhere else seriously, and disciplines with arcane names like plastination, brain mapping and optogenetics are making it seem more plausible.

But there’s a lot more to it than installing a USB port on the back of your head and just plugging in. The problem is that while a computer works by recording and reading ones and zeroes, your brain works when cells powered by blood sugars send electrical signals to each other – two very different systems.

What’s more, we don’t know what the brain’s actually doing with these nano-scale sparks. They somehow combine to form consciousness, but we don’t know how to replicate or measure it. All we know is the brain contains an unfathomable number of surprisingly simple moving parts that somehow give rise to everything you feel, think, dream, fear and love. So if we could transport the information encoded in all those sparks and move it somewhere, it might mean moving the mind and the entire ‘sense of self’ it contains.

In his 1995 book Are We Alone?, cosmologist Paul Davies suggested that if you gradually replace every tiny part of the physical brain with a vacuum tube, wire or transistor that did the same job as the bit it replaced, there should be no change to the thinking, feeling person inside – even after you’d replaced the whole thing with artificial parts.

So the only thing stopping us from extracting the conscious self might be overcoming the complexity, and research called the Human Brain Project might be the first step. Scientists at Switzerland’s École polytechnique fédérale de Lausanne are literally building a virtual brain in a computer, one neuron at a time. If it works the same way an organic brain does (albeit in software), might it be the perfect medium to house an integrated mind?

Since the pattern of activity between neurons is the only physical manifestation of consciousness in the real world, it might be as simple as recording and digitising the position, duration and order of each spark.

Believe it or not there’s progress there too. Scientists at the Norwegian University of Science and Technology injected a special photo-sensitive virus into the brains of lab mice. When the neurons the virus is attached to become active they literally light up, visible to an observer.

That means as each part of a ‘thought string’ fires, the locations and relationships of the neurons can be recorded. One incredible effect was seen in a Duke University, North Carolina experiment where a wire linked the brains of two rats. The computer translated what one rat felt and did by reading the neural pattern and sent the signal to the next rat, which did and felt the same ting (albeit in a crude and rudimentary form).

So couldn’t a ‘live stream’ of such neural activity be captured from a human – expressed in the one-and-zero language computers speak and then called up in a computer or robot like any other program?

Theoretically, but we’re a long way off. The workflow to achieve it will take a lot of scaling up for the 100-billion-neuron human brain. Plus, a single error in the code could have a compound effect where you forget your spouse’s name or mistakenly put your shoes in the fridge. That’s already what happens when the biological brain goes wrong, leading to conditions like dementia.

Plus of course, the mind is virtually meaningless without the rich emotional and physical feedback the body provides from the world outside.

But imagine advanced engineering that can replicate everything your body can do in a robot, or give you the neurological illusion of a body through virtual reality, Matrix-style. Endlessly transferring the mind from one high performance android body to another sounds a lot like that other long dreamed-for sci-fi condition, immortality…