Skip to content
November 28, 2011 in The West Australian See more stories from this title 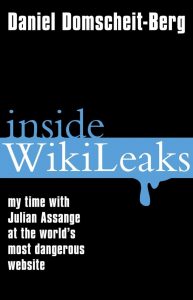 Like the Royal Wedding, the Victorian Bushfires and the death of Michael Jackson, you can be sure of one thing when there’s a cultural event everyone’s talking about or watching unfold — the publishing industry will respond in a way that threatens to bring out the cynic in all of us.

Sometimes the full story is deeper and there’s a good reason for the slew of books that follow a newsworthy event. The Wikileaks saga that gripped the world in late 2010 is one deserves thoughtful analysis. Who knows how many times it’s been (or is yet to be) mentioned in the media, but three titles in particular will give you a primer into the shadowy world of political openness, activism and Julian Assange now that he seems to have had his 15 minutes of fame.

The first and most dispassionate book, The Most Dangerous Man in the World, by ABC investigative reporter Andrew Fowler, is about Assange himself. Because the Wikileaks story (and the charges against Assange) was still unfolding when it hit stores in March, it’s an incomplete picture.

But Fowler turns a journalist’s eye on what we do know of Assange’s life and what drove him to launch Wikileaks in the first place. After an upbringing at the hand of itinerant hippies the intelligent, strong willed Assange found his natural niche when he discovered computers. After a career as a hacker he followed his natural desire to upset the establishment by launching Wikileaks in 2006 as a way for whistleblowers to disseminate secret but damaging information about public and corporate power.

The Afghanistan war papers, the damning video of US soldiers opening fire on a car full of journalists and children and the huge volume of leaked diplomatic cables sent Wikileak’s cultural stocks through the roof and made Assange anything from a digital Robin Hood to a terrorist himself depending on who you asked. His private habits became myth — living hand to mouth with no possessions to his name, maintaining his website with collaborators all over the world and moving countries like most of us change underwear. Fowler’s account is more a well put-together distillation of what is known rather than any inside access, so it’s a good place to start.

For comment on the whole Wikileaks phenomenon and how it fits into political and media culture, American academic Micah Sifry’s Wikileaks and the Age of Transparency is a well-argued tract. Though not strictly about Wikileaks itself (you suspect the publisher commissioned it with the intention of slapping the Wikileaks name all over it to aid the marketing effort), Sifry investigates the nature of transparency in society. Should we expect — even ask — our governments and corporate leaders to keep secrets from us in our own interests? If not, whose responsibility is it to expose them? And if there’s a line between complete, unedited disclosure of public documents and secrecy to protect someone’s safety, where is it?

In Inside Wikileaks, Daniel Domscheit-Berg’s account of being Assange’s right hand man is the least credible book on Wikileaks but by far the most entertaining. After an exciting early period working remotely for the website, relations between the two broke down and resulted in the now-famous instant message exchange (first acquired and published by Wired magazine) where Assange suspended Domscheit-Berg from his duties.

According to the young German programmer, Assange is a power-hungry, dictatorial megalomaniac who tolerated no dissent about how Wikileaks should be run and quashed any opinion that differed from his own. From page one Domscheit-Berg’s putting the boot in, telling us that while he worked with Assange he’d ‘experience firsthand how power and secrecy corrupt people.’ It turns more serious and slightly even slightly creepy later when he sprays ‘sometimes I hate him so much I’m afraid I’d resort to physical violence if our paths ever crossed again’.

Though he probably has the closest insight into Assange’s character, Domscheit-Berg comes across as a man suffering a bad case of sour grapes despite after having had a rotten boss (how many of us could write that book, after all?), building up and tearing down the whole Wikileaks mythology when it suits his argument. He happily calls it ‘the world’s most dangerous website’ (on the cover, no less), but snorts with contempt when Assange describes the need to keep himself in hiding because it’s just a news website [sic].

Mostly, Inside Wikileaks is part vengeful hate mail and part self-promotion (after leaving Wikileaks Domscheit-Berg established Openleaks.org, a carbon copy of Wikileaks that so far hasn’t contributed a single newsworthy release). But if you can look past the vitriol there are actually some great nuggets of information, like where he highlights the irony of Michael Moore’s offer to post Assange’s bail when he was first arrested for sexual assault — Assange always thought Moore was an ‘idiot’.

Of course, you have to take everything Domscheit-Berg says at his word. Even aside from Inside Wikileaks (and no matter how disagreeable or power-mad Assange may be personally) he’s by nature a second place getter, an also-ran who just happened to be there to see someone else make history, like the radio newscaster who stood on the ground trying not to cry as he described the crash of the Hindenburg.