Skip to content
May 20, 2014 in Moviehole See more stories from this title 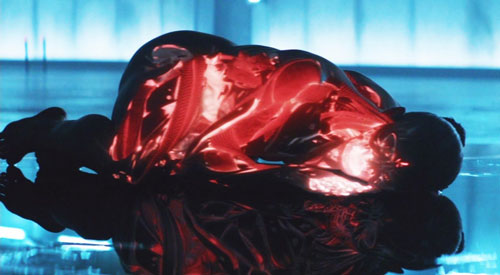 Sci-fi is a lot like the moon landing or the assassination of JFK – a before-or-after proposition. The defining moment that changed sci-fi came on May 25, 1977, when the director of the fairly successful American Graffiti unveiled his update of the classic Western set in space with robots and laser cannons instead of gunfighters with sixguns.

Since then, science fiction has been about spectacle, thrills, high-tech war. Before it the genre was about civil rights, official oppression, gender tolerance, environmentalism and the cults of youth and money – the subtexts of films like Planet of the Apes, Silent Running, Logan’s Run and Metropolis are known and loved by millions.

Every now and then a film artist comes along with a small enough budget to escape the yoke of a studio marketing committee demanding more fights and weapons to go along with the action figures and Happy Meal tie-ins, and Welsh writer/director Caradog (pronounced Ca-RA-dig) James has done just that.

Was there a particular influence behind the look?

I didn’t go to film school so my education was watching movies. I love Ridley Scott, John Carpenter and Stanley Kubrick, so I learned a lot just by studying where they put the camera and why they moved it at certain points, how they used the light to help tell a story. As a filmmaker that’s the fun stuff really, working out how to use all that visual information to help tell the story beyond dialogue. How a film looks or feels is just as important.

I had this idea when I was writing the script that it would be a journey from darkness into light. That’s why the only scene with sunlight is at the very end. Everything else is dark.

You can’t help being influenced by other filmmakers but at the same time the story is based on research rather than other movies. I spent a year researching the script and that included an off the record meeting with a guy at the Ministry of Defence who’s actually building intelligent machines for the British government. That research is very important in terms of discovering the story I wanted to tell.

Sci-fi like The Machine is often very much about the themes. How foremost in your mind are they when you’re writing, or do you let them emerge a bit more organically?

Before I can start writing I need to find the emotional heart of the story, but I was very interested in the themes of AI – that’s what inspired me to try and find a story to tell. So I read every book on AI and robotics and futurism I could like Ray Kurzweil’s stuff about where technology might lead us. I even read a couple of books on quantum theory and quantum mechanics because that seemed to come up time and time again when people were talking about the future of AI.

And then the producer John Giwa-Amu had contacts at the MoD and he got me this interview with this guy. He (the MoD guy) really opened up to me, I think because I had clearly done so much reading before the interview.

Of course that provoked the first question; they’re going to map of a human brain, so if there’s an exact copy of the human brain in a computer that thinks and feels and plans and hopes and desires, what’s the difference between the original and the copy? Where’s the humanity? That was the first question that I wanted to explore in the script.

The more research I did, the more I began to see there was a very interesting story to be told, and it hadn’t been tackled before by an independent movie. Our budget was less than a million quid, and people shy away from sci-fi at that end of the spectrum. But I just felt we could do something ambitious.

Talk about the release strategy for something so small scale.

We sold the movie in Cannes a year ago, and I had some meetings in LA recently but that was more about future projects. But it’s going to be an art-house release with a limited cinematic season with VOD.

The trouble with independent cinema is really that the only model that makes sense for a wide release is that if you make the thing for 10 million quid you’ve got to spend another 10 million quid to release it so everyone can hear about it. It’s just not something you can do on a tiny budget like ours.

You had a fantastic result on iTunes though [the film came very close to the top of the charts].

It’s our only option for a film on our budget. It’s a bit of a shame because I think it’s a very cinematic film, but I love the fact that all these internet platforms let people see the movie when they want to.

And we’ve got a much bigger audience than I think we probably would’ve got with a cinematic release. People don’t have that much money to go to the cinema and they only seem to turn up if there’s a huge star or it’s a comic book franchise. But video on demand is a wonderful tool for independent cinema to reach an audience. The other films in the top 10 in iTunes were all blockbusters with 10 or sometimes a hundred times our budget. So it was wonderful company to be in and it’s amazing really that we got to number 2.

Knowing that most of the audience will be on VOD, do you adjust your sensibility to that when you’re writing or directing? The Machine was still very cinematic, as you said.

I make films to go into the cinema, not to be seen on television. I think that’s the fun of cinema, I think there’s something very precious and thrilling about the fact that when people go to the cinema you have their attention, not like in front of a TV, so I want to respect and reward that by making my films as visual and interesting to look at as possible.

So are you hoping The Machine becomes your calling card to the blockbuster leagues?

I hope so. It seems to have opened a lot of doors already, so I hope it continues to do that.

Obviously the presence of Denis Lawson [rebel pilot Wedge in the original Star Wars saga] lends a lot of sci-fi legitimacy. How much did that have to do with his casting?

What was actually in my mind was a film called Local Hero, which is one of my favourite films of all time. I actually didn’t think about Star Wars at all. And it’s a good thing because Denis hates talking about Star Wars.

I went up to him after he agreed to do it, shook his hand and said ‘I’m so pleased you’re doing it because you were in one of my favourite films of all time’. And you see his shoulders just slump, and when I said ‘Local Hero‘, I wasn’t trying to kiss his arse or anything, it was genuine. And from then on we were very good friends because that’s one of his favourite movies of his too.