Skip to content
January 3, 2011 in The West Australian See more stories from this title 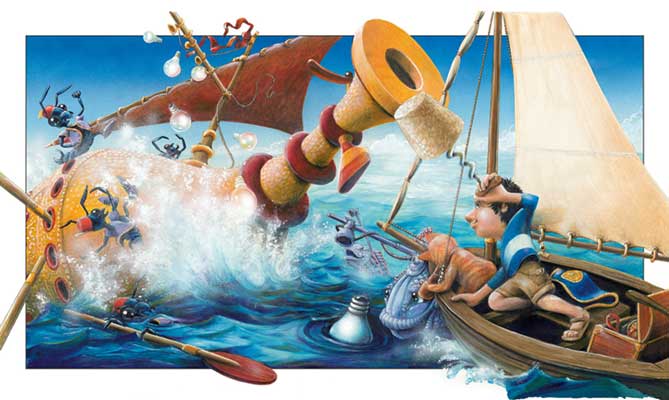 Graeme Base turns out to be an enigma. A traditional illustrator and writer, he burst onto the book scene almost a quarter century ago with the 1986 smash Animalia. his second book, it went on to sell three million copies worldwide, install Base as a bona fide illustrating superstar and lead to a career with nearly a dozen titles to his name.

Predating Where’s Wally by a year, Base set the benchmark for what would soon become his signature style — incredibly detailed artwork of endless nuance, each picture something you could pore over for hours finding every detail the book challenged you on (or which you discovered by yourself).

With such a rich pedigree of traditional craftsmanship, it’s surprising to learn Animalia has its own iPad app. From the man who had a childhood he describes as ‘straight out of a storybook’ — with plenty of time to read and let his imagination run wild — The West expected a rant on how kids are cooped up inside staring at screens instead of reading books or exploring the world around them.

But the youthful 52-year-old not only loves the arrival of the technology to bring his work even more alive, he’s been waiting for it for years. “Back in the late 90s we worked on getting my books onto CD ROMS,” he remembers. “But with all the detail it would have taken far too many CDs just for one book.”

When you hear Base explain it, the marriage of his artwork and the electronic medium actually makes perfect sense. To borrow an overused buzzword, his pictures were interactive long before the world of websites or downloadable apps. “You can hide more things in pictures, set more games and challenges and have much more fun,” he says.

True to his word, The Legend of the Golden Snail — Base’s latest release — is not only a beautifully illustrated book with a worthy message about good deeds finding a way of coming back to you, it contains what the author and his publisher calls Augmented Reality. His website at graemebase.com challenges you to find all the clues from pages of the book and treats you to a very neat trick on your own screen courtesy of your webcam.

It could be seen as a gimmick, but it’s simply the latest move by an illustrator and author who’s always been ahead of the curve. Maybe that’s why he’s still going strong after 25 years.