Skip to content
August 31, 2015 in Total Film See more stories from this title 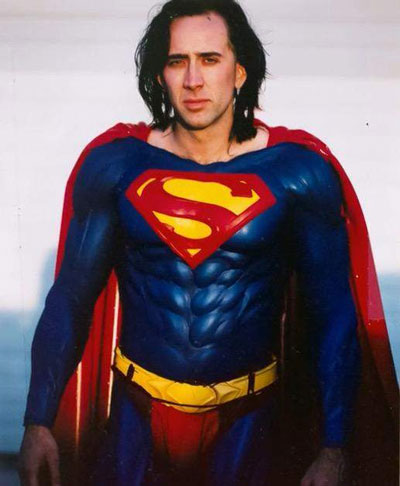 Shots of a Superman outfit looking like a Starlight Express reject (no cape! Electric blue!) and Nicholas Cage sashaying around a London hotel room in a supersuit would break the internet if they surfaced today.

But back in the late 90s they were the only clues we had that Warner Bros had been planning Superman Lives. An incredible amount of concept art and costumes were done, and director John Schnepp finally tells the whole story in The Death of Superman Lives: What Happened?

“I really like the sustenance suit, a lot of people thought that was the outfit,” Schnepp explains about the notoriously reviled blue outfit, just one mystery he puts to rest (among the three scripts written was a scene of Superman recuperating in the suit in an orbiting pod after the Doomsday fight that kills him).

Schnepp says he was initially drawn to the concept art because it looked like Superman Lives was going to be very different to everything that had come before. Digging deeper, it turned out to be the tip of a very large iceberg where almost $20m had been spent on some incredible preproduction that was ultimately scrapped – the costume test videos with Cage, intended director Tim Burton and costume designer Colleen Atwood are only one example.

The Kickstarter campaign and subsequent production was a very different experience for Schnepp, traditionally a narrative fiction director. “Doing a documentary means you’re helpless,” he says. “You’re waiting for other people to agree to be in your film, and a lot of people didn’t want to do it so I’m especially thankful for the people that did.”

Among those who did, besides the jovial Atwood and the designers behind the prototype suits, is the slightly pensive Burton. “We were in England and not even confirmed to talk to Tim, we were being vetted,” says Schnepp. “We met with him and talked about Aubrey Beardsley or some obscure artist reference and he said ‘oh, you guys are okay’.”

But the most fun is larger than life Hollywood producer Jon Peters, who’d shepherded Burton’s triumphant Batman to screens in 1989. Peters comes across as just the kind of self-involved egomaniac you expect from an old school producer (he grew up in Beverly Hills and was once a hairdresser to the stars but still claims to have been in ‘500 street fights’).

Schnepp says he sold the producer on the promise of balance. “I said ‘look man, a lot of people are crapping on it. I’m not crapping on it, I’d just like to hear your side of the story’.”

And besides the gems already on offer (Christopher Walken as Brainiac – information the filmmakers had to keep secret for a year) Schnepp promises there’s a lot more that didn’t make it into the final cut. “Buy the Blu-ray,” he beams, “it’s going to have a lot of fucking cool shit on it.”

The Death of Superman Lives: What Happened is just the latest in a burgeoning genre of documentaries about movies that almost happened, after Jodorowsky’s Dune (2013). Coming up – Doomed: The Untold Story of Roger Corman’s Fantastic Four and the Australian production Miller’s Justice League Mortal is in development.

With Armie Hammer (Batman), DJ Cotrona (Superman), Megan Gale (Wonder Woman) and Adam Brody (The Flash) all cast, Warner Bros pulled the plug. The superfriends film would have got the drop on The Avengers by three years but with new cachet thanks to a certain road warrior, could Miller revisit it?

Cameron’s scriptment for the Spidey he was web-slung in to write depicted Peter Parker as profane, violent, a little drunk with power and kind of a jerk. Litigation embroiled soon-to-be-broke production company Carolco, Columbia, Viacom and Fox (who considered Cameron under contract to them), and it never went ahead.

Scripted by Akiva Goldsman, Warner Bros wanted Christian Bale for Batman and Josh Hartnett for Superman, both crime fighters ready to retire when Lex Luthor and the Joker engineer a rift between them that leads to an epic smackdown. Shelved in favour of Nolan’s take for Batman Begins.

If ever there was a man inventive/crazy enough to adapt Alan Moore’s ‘unfilmable’ graphic novel for the screen, Gilliam might be it. Written by Sam Hamm (1989’s Batman), budget and story concerns gave the suits cold feet, even after Gilliam pitched is as a mini-series. Snyder went safe and kinda dull instead.

After virtually trademarking great roles for capable women in pop culture (Buffy, Firefly, etc), Whedon’s Diana Prince is among the most painful of those that might have been. With Steve Rodgers (ie Captain America) as her love interest, Whedon said he and the studio just didn’t see eye to eye.