Skip to content
March 8, 2007 in Xpress See more stories from this title 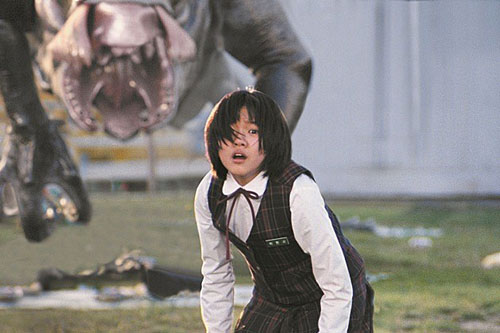 You probably don’t know this as you watch one of the most anticipated monster movies of recent times, but the first scene in The Host really happened.

In 2000, in a US military facility morgue in Seoul, an American doctor ordered a Korean assistant to dispose of dozens of bottles of highly toxic formaldehyde by tipping them down the sink, where they’d wind up in the Han River, the waterway that bisects the South Korean capital.

“When the incident happened the mental shock was quite huge,” says The Host’s writer/director, Joon-ho Bong. “Americans always say they do things by law and do things reasonably but in their actual behaviour that wasn’t the case.”

Xpress’ conversation with Bong happens over the phone via an interpreter, but even without the colloquial nuances of direct speech, it’s easy to understand the frustration with the US that gave Bong the idea. In fact, as he explains; “There’s a strong anti-American sentiment in the movie. America’s the most powerful country in the world and sometimes their influence can be positive, sometimes it’s negative. In one sense we could say they are the monster in this era.”

With effects work from Australia’s John Cox Creature Workshop, Weta Digital and a San Francisco-based effects house called The Orphanage, The Host is something of an international effort, but even with the political undertones and Alien/Jaws appeal of a unique and eye catching monster, the old scripting axiom is true; the most important aspect to Bong is the characters.

It’s just one of the reasons critics everywhere have been crowing about how The Host is as effective a human drama as it is a horror movie. “I thought Korean audiences would react more strongly to that opening sequence,” Bong says. “The reason the monster was created was due to the Americans and what they did. But generally people would find the main characters more attractive because they’re powerless, ordinary working class citizens and when you see what they go through you really relate to them more strongly.”

Don’t make the mistake of thinking you’re watching Terms of Endearment however. The monster attack scene — coming about five minutes in — is reminiscent of the Tyronnosaurus Rex arrival in Jurassic Park, the appearance of the first tornado in Twister or the moment in Pearl Harbor when the first Japanese finger releases the first bomb. The creature mutated thanks to poison emptied into the drains is the money shot you’ve bought your ticket for.

Lovable, irresponsible dolt Gang-du (Song) runs a takeaway food stall with his father along the banks of the Han River. One day when his cute daughter Hyun-Seo comes home from school, he’s sent out to deliver an order to a diner near the Han’s bank to find everyone crowded around watching something in the water.

After throwing stuff at the huge shadow and watching it swim off, everyone gradually drifts away, until Gang-du looks up to see the most horrific beast running down the riverbank towards him, crushing and attacking people left and right in an eye-popping steadicam sequence.

The creature is the host of a mutation caused by the toxicity of the river, and after a riverside bout of carnage, it swipes Hyun-Seo to drag back to its lair.

After the pandemonium has died down and Gang-du and his family have assembled in an emergency shelter believing Hyun-Seo dead, he suddenly gets a garbled call from her mobile.

Very much alive, we join Hyun-Seo in the creature’s lair deep in the riverside sewer system where she’s hiding among the dead bodies the creature is storing up for food. In the face of the authorities’ ineptitude and inflexibility, Gang-du and his family take matters into their own hands to save Hyun-Seo.

It’s a very cool idea for a story with a classic structure and it’s true, the characterisations and relationships between them do breathe new life into a very old genre where it would seem no new ground could be found.

None of it would work with cardboard cut-outs or shoddy animation however, and both the design of the creature and the astounding work by Weta and The Orphanage bringing it to life make the creature entirely believable.

The fantastic genres like horror and sci-fi are routinely rejected as forgettable but that’s only because the movies in them are usually poor carbon copies of themselves and each other. An exciting, good-looking and well-structured movie with good characters is increasingly harder to come by and transcends any genre. The Host breaks free of its limits effortlessly.