Skip to content
December 1, 2005 in Filmink See more stories from this title 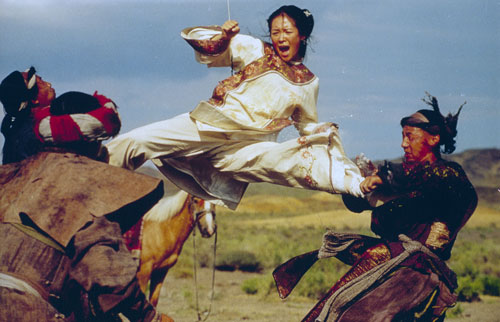 As the youngest language in the world, English has triumphed as being the most universal form of communication in history.

On the back of both the mass communications of the modern era and the rise of the United States in world affairs, without it you’re restricted to your own corner of the earth, whether it be for work, trade, or entertainment.

Signs at airports all over the world are marked in English alongside the local native tongue, currencies from the Euro to the Rupiah are measured against the US dollar, and seeing actors on movie screens speak in English is as natural to us in Australia as a shrimp on the barbie.

And while depictions of Australians on screen usually range from the stupid to the stereotypical (and usually embarrassing — witness Bill Hunter in Kangaroo Jack (2003), Sarah O’Hare in Head over Heels (2001), and the entire Bush Tucker Man/outback hero mythology built on the back of Crocodile Dundee (1986), we’re not the only country who cops it.

American filmmakers are notorious for missing the finer points of local dialects and customs the world over — usually resulting in corny, outdated caricatures that offend as much as entertain. For every onscreen Aussie that says ‘G’day mate’, there’s an ethnic or foreign national regurgitating the equivalent of ‘Lavverly jubberley’ (Britons), ‘So solly’ (Asians) and ‘What’s it all aboot?’ (Canadians). After all, most American films are made to entertain American audiences, so can we blame middle America for having a hopelessly narrow worldview?

But when it comes to telling stories in the movies that are going to be in a language native to the local setting and period of history, Hollywood producers have a huge bag of tricks to select from.

To be fair, it’s not an easy choice for moviemakers. There have been thousands of movies set in space featuring aliens. The most famous example — Star Wars (1977) — used a grab bag of methods.

The ragtag band of heroes spoke American English (like all good people and heroes do). The snooty, hierarchical and overtly monarchist (to the point they even have lords and an emperor) villains were all from Britain — expect where the role called for a touch of class, as it did for both the young and old Obi Wan Kenobi and Qui Gon Jinn (Alec Guinness, Ewan Macgregor and Liam Neeson respectively).

Where it was economic, we got subtitles — though only a few characters like Greedo and Jabba the Hutt were so translated. And for everyone else whose language was a bark, beep, shriek, whine or roar, we had C-3PO and his database of over six million forms of communication or Han Solo’s reactions to the bellowing of his first mate.

Science fiction with less time to spare for exposition took sharper corners to cross the language divide. In The Last Starfighter (1984), hero Alex Logan has a universal translation device clipped under his collar — as soon as the technician applies it, all the voices around him turn into English.

Currently in production is the big budget version of the classic Hitchhiker’s Guide to the Galaxy, in which Douglas Adams got around the problem of language differences by introducing the Babel Fish, which Arthur Dent slides into his ear canal where it feeds off brain waves and excretes words translated into the ‘owners’ language.

In a million lesser space operas, from Battlestar Galactica to The Chronicles of Riddick, the problems of language differences is systematically ignored, dozens of races and life forms conveniently speaking not only in English, but using modern American vernacular (sounding nobler where necessary by not abbreviating words).

But what about closer to home on Earth where we have the problem of thousands of languages and only one American audience?

The period from the postwar years right up to the early 1990s was particularly problematic for directors making so many movies involving Russians.

Staunch anti-red statements like Firefox (1982) and Rocky 4 (1985) (which morphed into a cold war parable from its humble beginnings as a local underdog success story) put language in the too-hard basket, having the villainous commies speak in perfectly intelligible English but with appropriately nasty accents (harking back to ‘zee Germans and zeir evil vays’).

The Hunt for Red October (1990) did a better job than most — rather than ignoring language completely or reducing foreigners to Dastardly Dan, moustache-twirling comic strip characters, it zoomed in on Sean Connery’s mouth mid-sentence.

His Russian changed to English and the camera pulled back slowly to continue the film. Director John McTiernan was saying to us ‘look, you know and I know he’s speaking in Russian, if I don’t hassle you with irritating subtitles, promise you won’t think the characters have no credibility.’

It’s not just accent Hollywood has a problem with either, it’s dialect.

One of the immutable laws of LA moviemaking is that no matter where and when a movie is set, studios want a face that can open a blockbuster. That means an American actor in the lead role, no matter how ridiculous (and in such a long stretch of human history where America — let alone English — didn’t exist, it frequently is ridiculous).

How many (sometimes great) movies can we look back on chortling at the notion of Americans running around the great moments in history.

Whether it’s Kevin Costner’s Robin Hood (1991) the ancient Greeks and Trojans of Troy (2004) or the Saxon hordes in King Arthur (2004), pick any race or war throughout history and you can bet that the heroes in each case sound like they’ve just got off the bus from Cornball USA.

It’s not a new phenomenon, either. As two of the most accomplished actors in film history, Anthony Quinn and Alec Guinness played the parts of a Middle East warlord and an aristocratic Arabian prince respectively in David Lean’s Lawrence of Arabia (1962), and Quinn’s most famous movie role was as a Greek named Zorba.

But now, things have changed. Not about Americans in starring roles playing foreigners — bankable actors will do that until the end of time in a desperate effort for acting kudos and award recognition.

The view on language in movies has changed — especially recently as so many other regional filmmaking styles around the world are weighing in to the global film mix.

Thanks to a little story about a Crouching Tiger and a Hidden Dragon, studios (and audiences) realised something amazing; subtitles don’t spell the death knell of a movie as previously thought.

It used to be a heavy price to pay for your movie. Making your audience ignore the action on the rest of the screen to continually draw their eyes to the text along the bottom was considered too much work to ask a moviegoer to invest in, especially if there was a lot of detail in the rest of the frame.

The upside was that you could claim an enormous boost of authenticity. Think about those last few seconds of The Greatest Story Ever Told (1965). In the midst of the grandeur of Christ’s death, Roman centurion John Wayne drawls ‘This must surely be the son of God’ in a voice straight out of a John Ford western, ruining the epic effect in a chorus of unintended audience laughter.

Christ was the subject of another triumph of lingual authenticity. One of the biggest hits of the year was Mel Gibson’s firebrand drama about His last hours, Passion of the Christ (2004). Originally intended to be spoken in Latin and Aramaic without subtitles, somebody talked Gibson around (thank God’ see what we did there?) and we got to see what was actually being said.

The dialogue added weight to an already brilliant film. Imagine how different a film it would have been if spoken with broad American accents, or in English at all? The ancient and native languages were a crucial member of the cast and crew as much as Gibson or Caviezel.

The language changes the whole tone of expectation around a film; it says ‘intellectual’, ‘arthouse’ or ‘high quality’ almost by definition. If Eric Bana, Orlando Bloom, Brad Pitt & Co had been taught to speak in ancient Greek for Troy (2004), it would have been less of a rippling-muscled, stock-standard action cash in on classical literature and more of a high quality historical piece that also dazzled us with impressive battle scenes (or at least, we would have been fooled into believing so if it had been subtitled).

1970’s brilliant Tora Tora Tora switched back and forth between the Japanese and American forces in the lead-up to the December 1941 attack on Pearl Harbour, the Japanese all speaking in their native language with subtitles, heightening the sense of the whole film being a documentary.

Peter Jackson and New Line have come the closest to realising how much class a foreign language can lend to a film. Even though the elves from Middle Earth can speak the common language, the most tender moments between Eowyn and Aragorn are spoken in the sensuous Elvish tongue with subtitles, gracing the entire Lord of the Rings trilogy (2001-2003) with a heightened appeal and high-class tone usually missing from the action adventure genre.

And now, Hero (2002) graces our screens. The critically acclaimed martial arts epic has been accepted by audiences and critics alike as poetry in motion. Would it have the same effect if — instead of being spoken entirely in Mandarin, Nameless says to the king of Qin province ‘Dude, Sky, Snow and Sword tried to, like, come and kick your ass’?

So what can we learn from the experience of the last couple of years? First, very few American actors can master foreign accents.

There are exceptions. Much has been made about Texan Renee Zellweger’s nailing the British accent of Bridget Jones, and two actors in living memory have performed believable Australians — Robert Downey Jr as slimy reporter Wayne Gale in Natural Born Killers (1994) and Meryl Streep as Lindy Chamberlain in Evil Angels (1988).

Previously the honour was left up to quasi-British accents like that of Anthony Perkins in On the Beach (1965) (Ava Gardner didn’t even bother dropping her American accent to play a Melbourne socialite).

But more importantly, the moral of the story is that a foreign language won’t destroy your film’s big box office potential. Furthermore, your audience are neither too lazy nor too stupid to read and understand subtitles, so think hard about having them — depending on your movie, the language it’s in can make a vast difference.