Skip to content
March 20, 2010 in The Sydney Morning Herald See more stories from this title 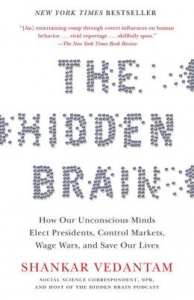 Since the time of Freud, mind science has considered the brain a tool at war with itself. Whether it’s left versus right or reason versus emotion, navigating our way through the world has been a constant process of deciding which side to listen to and which to suppress (usually without success).

Norman Doidge’s The Brain That Changes Itself sparked off a new movement about the cohesion we can actually find in the brain. Rather than a critical design flaw, the battles we inherently feel in our nature are in fact smooth mechanisms for efficiency. As Jonah Lehrer’s The Decisive Moment argued, emotion isn’t an obnoxious harpy distracting us from objectivity and logic, it actually gives us a framework about how to act — applying constructive reasoning to every aspect of our environment would paralyse us with doubt.

Harvard University Neiman Fellow Vedantam also uses the latest behavioural science to make his point, but much of what he covers in The Hidden Brain supports the older paradigm — that our nature is to be frightened and suspicious, tendencies we have to work to overcome in order to be civilised.

The hidden brain of the title is a complicated melting pot of split-second responses and processes, and Vedantam contends it’s not only responsible for most of our decision making but can be manipulated through chance or design to prompt us to act against our best interests.

A large part of what he argues is stuff any good news manager or charity already knows. Tell your audience that more than 200,000 Haitians are dead in the devastating earthquake and they’ll change the channel to check the football score. Show them the little girl found alive under the rubble desperate for food, water and shelter and hearts (and wallets) stricken by grief will open.

The reason is because when we see a human face we quickly establish an enormous bank of assumptions that tell us how to feel, responses that have been signaling friend or foe since we crawled out of swamps but which simple numbers can’t replicate.

As Vedantam puts it, such responses are sometimes wrong, but evolution has equipped us with what he calls ‘speed at the expense of sophistication’. Once upon a time all the stimulus we needed to form a picture of those of our tribe or family were the facial expressions around us. Today everything from phone calls to emails do our communicating for us, and they filter cues that are essential to human interaction.

Just consider how important body language is to establishing emotional states. The imperceptible signals that give us our opinion of the person we’re talking to sweep by our conscious awareness where our subconscious mind builds up a picture for us.

But the potential for misuse or socially inappropriate response is strong, and sometimes our unconscious is like the embarrassing grandparent you can’t have with polite company because of their outspoken, politically incorrect views. Vedantam writes about disturbing experiments where kids unconsciously equate black faces with ‘evil’ and wonders if such mass collective response is partly responsible for the social disadvantage African Americans face (one we could easily apply to indigenous Australians).

Despite the strength of his ideas, a shorter version of the book would have been just as impactful. The last two thirds consist of examples of the hidden brain at work that could have been just as effective in a more condensed form. For example, there’s an entire chapter on the death penalty that’s mostly redundant as it explores racial themes that have already been established.

But The Hidden Brain is another entry into a growing and fascinating body of work giving us a much clearer picture into why we act the way we do.