Skip to content
January 14, 2019 in Cosmos See more stories from this title 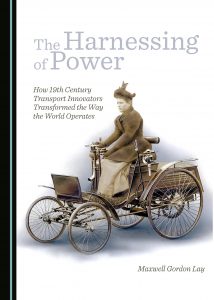 Did you know Daimler and Benz, whose names would combine to form one of the longest-standing car manufacturing partnerships in history, not only never met but were competitive rivals?

Along with countless more factoids like the above, the stuff 19th century transport scholar and author Lay doesn’t know about the history of steam, carriage or early petrol engine power isn’t worth knowing. This exhaustive account of the evolution of mass transport doesn’t leave anything out in between domesticated cattle and the first cars invented by the likes of Daimler and Benz in the late 1800s.

In talking about technological development, author Maxwell Gordon Lay details everything from the business climate to the political jostling that enabled some innovations and stifled others, the economies of scale that made methods profitable and even the personal rivalries between inventors.

All of which means he’s not just a historian and engineer, he identifies the social effects of transport development. When most humans walked everywhere, cities were limited to radii of about 3km – mass transit directly unshackled geographical growth.

He also weaves the story through milestones you probably know in passing – Watt’s steam engine (although plenty of others perfected it for mass use), the first time a self-propelled vehicle outclassed animal power in speed and cost, etc – and there’s plenty of fascinating trivia on the way.

The modern term ‘suspension’, for example, refers to the design element of suspending the cabin of a carriage on leather straps slung across the frame so the passengers didn’t feel the bumps over uneven cobbles. The gauge (width) of railway tracks evolved directly from the width of road needed for oxen to pull ploughs and for locomotives to turn safely at speed, not manure as the popular online urban legend would have us believe.

Most fascinating however is Lay’s case for the 19th century being the true age of disruption. In 1830 there were 30 horse drawn carriage services between Liverpool and Manchester. Two years later, after the advent of the steam locomotive, there was one.

It’s a stark reminder that even in our age of apps and smartphones, we’re still relying on century-old tools and designs with a few cosmetic changes – the only real mass transport development in the 20th century was the aeroplane.

The Harnessing of Power feels like it was Lay’s doctoral thesis, so the language and delivery can be a little bit dry, but it’s fascinating to know once you’ve digested it.