Skip to content
April 1, 2008 in Cosmos See more stories from this title 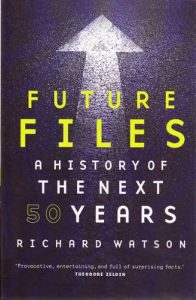 Capitalising on his name as a corporate speaker and futurist, Richard Watson is upfront in calling Future Files a book for business. It’s a bad sign and you expect another book showing big business how to extract even more money out of us.

In fact Watson has some interesting things to say about everything from health to transport, culture, eating and more. After also stating at the outset anyone foolhardy enough to make predictions will be judged harshly by history, he again contradicts himself by making plenty of concrete predictions – such as the appearance of artificial intelligence by 2025 and the merging of the movie, pharmaceuticals, neuroscience and computer industries by 2050.

Future Files’ overarching theme is that the future will be one of two extremes, one where things are trimmed and whittled down the fastest or easiest to handle – like supermarket meals pre-packaged for your genetic make-up or the end of cash for all-digital money, and the other where ubiquitous technology and ‘busyness’ fatigue increase a desire to connect (however superficially) to the old ways of slowly appreciated, high quality, handmade, etc. – and how technology will help provide it.

Watson’s assertions on the drivers of change make a lot of sense. It’s not about frivolities like fridges that order more milk over the Internet (an invention he points out has already failed to catch on), flying cars or holidays to the moon, but the rising influence of emerging markets like China and India or the burgeoning aged population and the impact it will have on every area of life from tourism to public health.

The execution isn’t as good as the premise. Some authors think saying things like ‘but I’m getting off track’ gives a book personality, but it just makes it look like it needed a few more passes by a competent editor to put it in order. However, besides a few quirks like a curious fetish to use the word ‘moreover’ far too much, Future Files is worth reading and remembering until 2050 to see what Watson was right about.