Skip to content
February 7, 2016 in Men's Style See more stories from this title 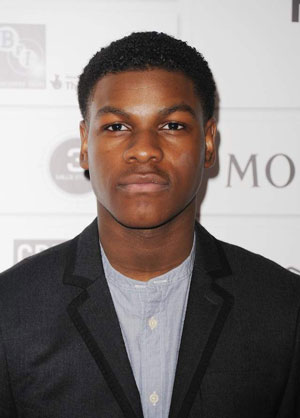 Are you still a Londoner or an LA guy now?

No matter what opportunities come up?

No matter where I am in the world I’ll always be a Londoner. I’m also a Nigerian.

If there was enough of an incentive to move to America would you consider it?

All we know about your character, Finn, is that he’s an AWOL stormtrooper. What else can you say about him?

What does it feel like getting the call that they want you for a Star Wars movie?

It felt really good but it wasn’t a call – it was face to face, which I really loved. JJ told me to come down to Mayfair and speak to him in a restaurant. We spoke about the whole audition process and what he sees in me and then broke it to me that I was going to be the new star in Star Wars. At that moment everything just froze. The world was just perfect for that split second. I got to share the news with family, friends, agents, managers, all that kind of stuff, it was great.

He told you the part was yours then and there?

No, he was telling me he was interested. We had a meeting prior but it was just about the creative content and coming into the auditions. So once approved, after the seven months [of auditions] where I was like ‘guys, I can be a part of your $4 billion dollar purchase’, they offered me the part, which was fantastic.

How did it feel at that point?

It felt really, really good, because I was so tired from going through that whole process. Reaping the benefits of it was just amazing.

How confident had you been until then that you had it in the bag?

I think you’ve always got to be. I’m not going to go in there doubting myself, I may as well not go. So I was definitely confident about doing the best I can. Actually booking the part, that’s something I kind of control. It must have been something they saw so I’m happy I did the work.

You were born 25 years after the original came out. Talk about your own relationship to the Star Wars universe.

The Phantom Menace came out in 1999 and I got a figurine, the Darth Maul one. I went back and watched the movies and realised that this figure came from an actual world.

Little did I know he didn’t have the biggest part in it but he exposed me to all these other characters like Obi-Wan, Anakin, all those guys. Off that I went to watch the originals in the technical [right] order and I was sold. They started bringing out comic books, video games, all that kind of stuff, and I got into it in general.

When did you know you wanted acting to be your life?

When I wasn’t good at football.

I drew some sort of attention from people in school when I tried acting out. As a child the only thing I could understand about positive feedback was laughter. So if I could make people feel loose enough and relaxed enough to laugh I knew I had something. I’d talk about certain family members and do re-enactments of things they used to do.

I used to think ‘you know what, I quite like this feeling’. That’s what it was for a long time until I heard people actually get paid for it.

So you had performance in you all along and you were just waiting to find it?

I think so. I think there’s something there that just chose to be the talent I wanted to explore, and I’ve explored it to the point that I’m in a Star Wars movie. That’s not a bad run at all.