Skip to content
July 25, 2012 in Dark Horizons See more stories from this title 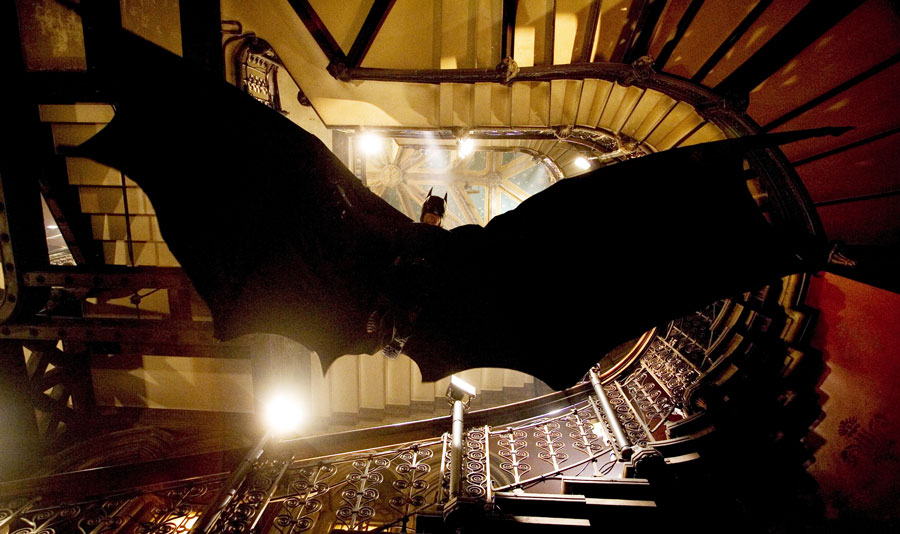 The media who assembled at the small The Dark Knight Rises press day in LA were still reeling from the night before. They’d been shown Chris Nolan’s trilogy-ending Batman film the way he hopes most audiences will see it – on a larger than life IMAX screen.

The cinema gave the awesome scope of Gotham city and the world beyond a vibrant new life, drawing you deeply into Nolan’s world. And the ground-shaking sound system bought every detail to life, from the thrumming rotors of Batman’s new air vehicle (The Bat) to the metallic musicality of Bane’s voice (Tom Hardy), every word dripping with malice and violence.

Even though the obvious question was how Nolan expected to better himself after the commercial and critical smash of 2008’s The Dark Knight, audiences have come to expect nothing less than brilliance from him. After Inception, Memento, Insomnia and The Prestige Nolan’s name has become synonymous with smarts and commerciality, movies that refuse to treat audiences like idiots but don’t forget to thrill us.

He always seemed like the last guy to helm the world’s biggest comic book superhero series, but Nolan brings the same sensibility to Gotham, and he was joined by his co-writer and brother Jonathan, producers and cast to talk about how he does it.

Chris Nolan: The challenge with any sequel is that you need to tell a new story and you need a reason to come back to it. That was very important when we started talking about it – what’s the conclusion of our story?

We didn’t want to do just another episode, we wanted it to be a consistent story across the three films. So the idea of consequences very much came in, we don’t forget how we ended the last film the way people sometimes do. We want to have all those things that happened – particularly in The Dark Knight – mean something to the story and feed through it. So that was the challenge, make all those things mean something.

Jonathan Nolan: The challenge for me was just to keep the plates spinning after these stories have been told for 70 years. It’s at odds with the needs of a good story that never has an end.

Question: How did you choose Bane as the villain?

Chris Nolan: It was very important that we not try and follow what we did with The Joker or do some pale imitation of what Heath Ledger had done. I really wanted to see Batman come up against a primarily physical adversary. I wanted to watch Christian as Batman stand toe to toe with a villain and not know who’s going to win. It was something I’d never seen before.

Question: How important a part of the process was getting the ending right when you went into the film?

Chris Nolan: The ending is the most important thing, I can’t really engage or even come into doing the film until I know what the ending is. So for me that always comes first. That was the first thing we had and we had it for a long time before we started.

Jonathan Nolan: Christian and David [Goyer] came up with Bane as the adversary. I wasn’t terribly familiar with the character and thought of it mainly in terms of his physical power. He’s the only person who can put a dent in Batman. But what I was struck by was the cunning of the character. In the second film one of the questions about The Joker was ‘does he have a plan?’ He’s an anarchist, which is terrifying enough, but Bane felt like a natural fit for the third film because he has a plan and that’s more terrifying. That in itself is very apt for the end of the story.

Question: Batman’s known for his gadgets. Are you all gadget lovers?

Gary Oldman: I’m not a gadget freak. My video machine is still blinking 12 o’clock. I like the iPhone because I like the pretty pictures.

Christian Bale: Same. Because of my daughter, I take pictures of her and that’s it. I don’t know what else it does.

Morgan Freeman: Awful. I don’t have a feel for them at all. I have a business partner who’s a computer geek and whenever I want to do something I have to call her, she’s like a 13 year old with computers. Yesterday I couldn’t get my television on. It said ‘no signal’ and I didn’t know what to do.

Michael Caine: I’m a Google freak. I like to know everything. I’ve always thought of myself as a know all and of course I knew nothing really. I have this friend and between us we figured out we knew a lot of stuff. So we call each other when we don’t know something, but now we’ve got Google and we know everything. You can even spell it wrong and they find it for you, so I’m a very happy man. Thank you.

Question: Anne, anything in your personal life or circumstances that you saw as a connection with Selina Kyle that you thought you could bring to the role?

Questions: Chris, what do you like about IMAX when 3D is still so popular?

Chris Nolan: When you shoot with those cameras and you project a film on one of those enormous screens, I’ve simply never seen anything that matches that image quality. It’s immersive power. We had success using it on The Dark Knight and we wanted to expand the use of it on this one.

As far as 3D goes, to me when you project a 2D image on a screen that big it’s got a larger than life quality and I think it’s very appropriate for these stories and these larger than life characters. 3D tends to be more intimate, more individual as an experience.

But we’re not reinventing something here, we’re finishing a story which I’d built to a climax, so I wanted the three films to be visually consistent.

Emma Thomas [producer]: IMAX is a real reason people get out of their houses and come to the movie theatre because you can’t replicate that in your living room. It’s hard to get out of the house sometimes because of kids or whatever, so it’s the one thing that really sells the movie and gives people something special in the theatre.

Question: Is this the end of a journey for Christopher and Christian or would you guys like to do more together?

Chris Nolan: What was very important to this film was that we were finishing our story. I’ve been working on Batman for almost 10 years and it’s been incredible, it’s definitely been a journey and now it’s over, and I leave with a certain amount of sadness but I don’t have to say goodbye to all these guys and the people I’ve worked with. But it’s bittersweet to say goodbye to the characters.

Christian Bale: Yeah, very bittersweet. At the end of The Dark Knight I wasn’t sure Chris was going to make a third one. It’s meant a great deal in my life but it’s time to say goodbye.

Question: Chris, you’re not really one of the ‘geek’ directors we associate with videogames and pop culture and comic books. How do you approach Batman from your particular sensibility and make the biggest and best superhero trilogy ever?

Chris Nolan: There’s been a shift in recent years about how people view the relationship between source material and movies when it comes to comic books. When I started on this project, the studio understood that the source material wasn’t necessarily how we were going to treat it in a movie. When we set out to make Batman Begins we just wanted to make a great movie and not pay lip service to or represent the comic book form in the movie.

Lately we’ve seen a shift towards a closer relationship with the form of the source material and the way in which it’s represented on screen. But it was always my intention to remove the [comic] frame and try and give you the experience that you had reading the comic book as far as what it did to your mind, the way your brain put you into that world and the magic of these characters rather than superficial form of what you were reading.

Question: How much of a challenge was it come up with something to top The Joker and Heath Ledger’s astonishing performance? And was there ever any thought of referencing the character?

Chris Nolan: The reason we chose Bane is because we wanted a very different film. I wasn’t going to set up to get Tom to do better than what Heath had done. I also decided early on it would be inappropriate to reference The Joker, a colleague and friend had suffered a terrible tragedy and to try and reduce that to a plot point in a fictional story felt wrong.

Question: What was the philosophy behind including Selina Kyle?

Chris Nolan: She’s a breath of fresh air for Bruce Wayne at the beginning of the film because we’re dealing with characters very much imprisoned by their past. Bruce has been in self-imposed isolation for a year and you get to understand why he’s drawn out by her. So it was a crucial and really exciting to watch these guys start rehearsing together and see how much chemistry they had to bring that alive.

Christian Bale: He’s in a very poor state mentally and physically when he first meets her and he’s amused by the fact that she’s stealing from him. She brings colour back into his life and makes him laugh. Equally with the character of John Blake [Joseph Gordon Levitt], Bruce is accustomed to being a prince where everyone bows to him, and here’s these brash and irreverent people who couldn’t give a damn who he is and he likes them because of that. They end up inspiring him to return.

Question: Alfred also has a lot to do with bringing Bruce back to the world of the living.

Michael Caine: I always saw my character as representative of the audience. He’s skeptical about everything that was going on and a bit worried when someone puts on a mask and flies over a roof. I’m there to suspend this belief because if Alfred believes it, you believe it.

Question: Do you feel The Dark Knight Rises is in any way political?

Chris Nolan: I don’t view the film as political. A lot of people chose to view The Dark Knight that way but in truth, the way we write and produce these films is really about entertainment and about storytelling. I will say we try and be very sincere in the way that we write about and portray the worries about the world when you’re trying to construct a villain or threat. If there are resonances about the film in the real world people interpret politically, I think that’s the reason for it.