Skip to content
December 20, 2011 in Moviehole See more stories from this title 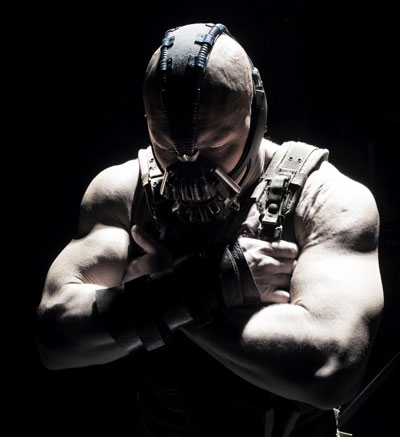 Seasoned film critics and bloggers alike were reduced to kids again after being exposed to what The Dark Knight Rises writer/director Chris Nolan calls the ‘sense of grandeur of movies’, something he told the gathering was being chipped away in all kinds of ways but which as a filmmaker he was always struggling to get back to.

The clip takes place on a plane and involves a jaw dropping mid-air heist the likes of which we expect from Bond films. It also introduces the menacing and genuinely scary Bane, played by Thomas Hardy.

Nolan said he wanted to show off the film’s technical artistry to encourage people to see the film in IMAX (The Dark Knight Rises will premiere on 100 IMAX screens worldwide in July 2012). And while it was visually stunning, most of those gathered hoped more work will be put into the sound mix. Some of the dialogue — particularly Hardy as Bane behind the iconic mask — was very hard to make out.

Like Batman Begins and The Dark Knight, the scene wasn’t particular colourful or rich but the IMAX screen filling your entire field of vision indeed makes the experience ‘immersive’ as Nolan described and the mid-air action almost brings on vertigo.

The clip will be going out before Mission: Impossible – Ghost Protocol when it releases later this month, and Nolan hopes it’ll entice people to the IMAX release, saying he shot a lot of the film using the 65mm format and calling it ‘far and away the best film format that’s ever been created’.

Nolan has barely begun editing The Dark Knight Rises, but come July the world will be looking forward to another of his trademark smart blockbusters.