Skip to content
August 1, 2001 in Australian Macworld See more stories from this title 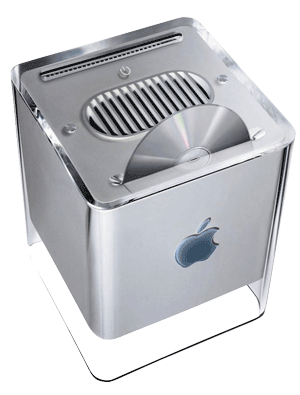 In Apple’s first real setback since the release of the iMac in 1998 (which was their second computer market revolution after the Mac’s 1984 birth), Apple recently announced that production of the Power Mac G4 Cube will be suspended indefinitely.

The press release assured consumers in every market of Apple’s commitment to bringing them ‘the best personal computing experience’, but the company’s only official reasoning why the G4 Cube has bombed is that most people opted for the G4 tower.

According to an independent press report, the G4 Cube ‘almost single handedly destroyed it’s fourth quarter earnings in 2000’. Even after a dramatic price decrease customers stayed away in droves, and it accounted for just under 16 per cent of Macs sold in the March quarter.

So why did such a radical new shape in personal computing — what Apple is world-renowned for — perform so poorly in the marketplace?

The first sign of trouble was the cracks controversy. Straight out of the box, the Cube’s clear casing appeared to have stress fractures in the plastic.

While they didn’t affect the performance of the breakneck dual processor and are unlikely to have turned people off buying a Cube, they did inflame an embarrassing PR issue for Apple.

Opinion is still divided, and Apple still defend the Cube by saying that the ‘cracks’ are actually the result of the plastic moulding process — even though they replaced some of the units following complaints.

But the secret to the Cube’s failure, according to resellers and users, has been the lack of consumer suitability. Peter Cannes, Sales Manager for Tyshe Digital, a group that owns four Apple Centres in Sydney, explains that the Cube didn’t really fit in to a consumer bracket. “It didn’t hit the home market or the corporate market,” he says, “It was too expensive for the consumer and not expandable enough for the prosumer.”

Greg Williams, Sales Manager for the Apple Centre, Sydney CBD, agrees. “It was too overpriced for the consumer but too ‘underspecced’ for the professional. Power users want something they can really fiddle with. About the only things you can add is more RAM or an airport card.”

But, the lack of upgradability was only part of the problem.

The Cube wasn’t only a lesser product (for the price), but it was competing against other Apple markets — markets that far more successful products such as the iMac, iBook and G4 tower had stitched up. “Apple has their four product quadrants” Williams says, “consumer desktop, consumer laptop, professional desktop and professional laptop. Those four quadrants had already catered for everyone.”

The price was also an issue. The promise of two processors of bone-crunching speed, a tiny space on your desk, the quietest machine in your house and the grooviest new design since the iMac were nice, but not enough to sway people from the initial price tag of over $3000.

Simon Hancock, Consultant with Perth Mac technician Massive Reaction, believes the Cube’s demise was the result of the sum of all fears; “The Cube failed to sell due to its niche market position. The G4 tower was a far more attractive option to the discerning buyer. Factors such as the high price, limited expandability and love/hate relationship with the design seemed to permeate.”

Plus, according to Greg Williams, the pluses weren’t enough to capture the imagination of the professional market. “Apple really promoted the good aspects,” he says. “They thought they’d sell a million. But professional users don’t care about things like how quiet it is because they’re going to shove it under their desk anyway.”

And what effect did the imminent release of Mac OS X have on sales? At the time of the Cube’s launch, Mac OS X was being publicised but Apple was only mid-release of the beta version. It’s possible buyers held off on Macs in general, waiting to see if the new Unix-based system would prove itself, and not just by being bug-free.

At Mac OS X’s release, little third party software was available that didn’t have to run in Classic mode (Mac OS X’s in-built version of System 9). Says Massive Reaction’s Hancock; “Until issues such as DVD playback, third party compatibility and overall system performance have been ironed-out the system will be viewed by some as being in its infancy.”

So even though some buyers sat back to wait, professional users who couldn’t afford to weren’t likely to spend money on a machine already infamous for its lack of expansion slots.

But, at Apple’s insistence, Cube owners love their Cubes, and of a couple of Cube owners asked, most agreed. If funds hadn’t been unlimited, most Cube purchasers (who belonged to the home consumer market) would have gone for the G4 tower — reinforcing Apple’s view of it being the premium desktop Mac — but were happy with what they had.

But for now the Cube’s production has been ‘suspended’ (according to Apple) as opposed to ‘stopped’. Maybe it was lack of upgrade options, maybe it was cracked casings, maybe it was simply an oversaturation of Macintosh computers in a well catered for market. But, as Myrna Van Pelt, spokesperson for Apple Australia, says, “the customers decided for us.”