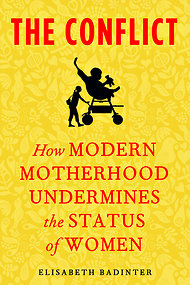 French philosopher Elisabeth Badinter thinks society’s expectations on mothers are as unrealistic as our expectations on women to live up to the picture of perfection. The Conflict is her manifesto on how motherhood has become hallowed ground in contemporary society and the model mother is an ideal no woman can hope to reach.

She argues that in trying to live up to the image of a perfect mother, women are enslaved to a new paternalism that’s just as damaging and backwards as the sexism that enslaved their gender for thousands of years, with male dominance simply replaced by baby dominance.

The woman is expected to take a backseat to the mother – her own interests, time, energy, career etc seen as selfish and self indulgent while she performs the almost holy task of raising a child. Badinter characterises the triumph of naturalism in baby rearing (bottles – bad, breast-feeding – good) since the early 2000s by describing the rapid and powerful reach of political interests like those of La Leche League. The US-based interest group preaches the sanctity of breast-feeding and the evils of formula no matter what the circumstances and its influence has reached as far as the United Nations.

It’s a stark contrast from the 60s and 70s when individualism and liberation were the prevailing socio-political moods. Forumla freed millions of women to return to work and enjoy life while they reared children rather than enslaving them to 24-hour availability as a food source. Arguments about the chemistry of baby nutrition aside (which is a whole other debate), we might as well give up cars because walking is better or light bulbs because the sun is better.

Badinter’s problem with all this deification of motherhood is that it just doesn’t fit in the world we live in, in Australia just like everywhere else. It brings to mind then-treasurer Peter Costello’s 2006 plea to have ‘one for Mum, one for Dad and one for Australia’. With parental leave policy still far from ideal in Australia, it seems among the least responsible of the Howard government’s reform attempts.

One of the results of such policy failures (along with women’s advancement into the workplace, better education, etc), is the declining fertility rate. If we’re going to exalt motherhood to such a degree, we have to be prepared to pay for it in a real dollar cost to society and stop relegating motherhood as being economically insignificant.

The hijacking of the woman to be the perfect mother simply won’t work in an economy where both partners have to work to keep the family solvent. Even when money isn’t necessarily the issue, people (as parents or otherwise) are different today. As Badinter puts it, ‘…this ideal of family life profoundly contradicts the aspirations of most men and women in the 21st century.’

She argues that the image of the ideal mother has become so entrenched it even affects women who opt out. As every woman internalises the picture of maternal perfection, it’s quite likely a woman will decide not to have kids because she knows she can’t or won’t live up to it. There’s no room in modern discourse about how parenting is at best a slapdash job none of us get completely right and none of us should have to lose our essential selves to do.

The Conflict also comments on the slow perversion of the altruism around child-rearing. We have babies to feel fulfilled as lovers and human beings, and as soon as they’re born the fulfillment can disappear as the mother becomes the baby’s slave. It’s even more troubling when it degrades the relationship the parents were hoping to strengthen in the first place – that of their own. Badinter refers to a staggering number of parents who admit (in anonymous surveys – few dare speak it aloud) that they had no idea how hard it would be to raise children and wish they’d never had any.

Badinter presents a compelling case where statistics from around the Western world combine with intelligent deduction about what they reveal. She charts the ascent of the naturalism movement and the guilt, pressure and policy reform wreaks on mothers around the world and puts forth a refreshing and urgent message about bringing up kids. Even with children we should still be individuals, partners, professionals and parents as the human condition allows for. We just need to relax.