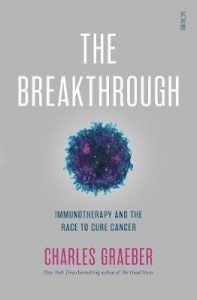 You might take any research related to cancer that uses superlatives (Breakthrough! Revolution!) with a huge pinch of salt. We’ve seen evening news soundbites cherry picking very inexact research for maximum impact for decades, all while just as many friends, colleagues and family members die of cancer as ever.

But it’s a shame, because real gains have been (and are being) made. Matching the genetic profile of the sufferer with the cancer they suffer to better combat it – one of the treatments talked about – was barely more than alchemy just a few years back, now it’s routine.

It’s one of the tidbits in The Breakthrough, a kind of grand unified theory of the cancer immunotherapy field. It was first mooted back in the early 1900s, falling out of favour when (as always) bombastic promises of a cure failed to materialise.

The theory is that because cancer is the body itself going haywire, the immune system doesn’t recognise cancerous cells as a threat. Teach it to do so by weaponising immune system T cells against it and the body will effectively do the work itself without the harsh side effects of traditional treatments.

Some of the stories in The Breakthrough are indeed about miracle cures, but the book is (perhaps unwittingly) about just how hit and miss the science is – in trials populated with desperately sick people just weeks from death, doctors and clinicians often have no idea why it worked for some but not others.

There’s a fair amount of hard science in The Breakthrough that might go over your head, but Graeber does a good job of convincing you of the potential.

But it’s also about about the slapdash systems outside the chemistry – economics, politics and even human prejudgment. The ‘cut, burn and poison’ approach still leads the field, and Graeber talks about plenty of conference arguments of traditionally trained doctors regarding it as little more than faith healing. Even if there was a shift in belief, there’s the years and tens of millions it costs to develop and release drugs.

The Breakthrough is quick to assure you even though the science isn’t there yet, cancer immunotherapy shows promise. And with almost 10 million cancer deaths last year (according to the WHO), maybe we shouldn’t so readily dismiss anything.