Skip to content
November 7, 2010 in The West Australian See more stories from this title 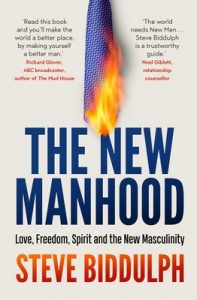 Men are in bad shape. We don’t talk about our feelings, don’t reconcile with our fathers, don’t spend enough time with our children, we’re made to feel outdated and brutish for our aggressive nature and like lecherous creeps constantly slavering for sex because we find such joy in it.

That’s the word from author and male mental and emotional health expert Steve Biddulph. His 1994 book Manhood was a runaway bestseller across the world and cemented him as the voice of several generations of men who were living lives of quiet desperation, unhappy but with no idea where to start in doing something about it.

Men, according to Biddulph’s book, were been cut off from so many of their basic natures it was making them sick as a gender – cold-hearted indentured slaves to mortgages whose only reason to exist was to keep their mouths shut, be the breadwinner and have a quiet beer every now and then.

Sixteen years later, Biddulph has written a new edition to address a situation he still sees as urgent. “When I first wrote Manhood I knew there was a terrible need for help for men, but I was only 40, so I was in the middle of much that I was discussing” Biddulph says. “We’ve learned a huge amount in the last 20 years – both ancient knowledge and my own – and I think we can really pinpoint what makes a man’s life work now. The core message of the new book is the definition of a good man.”

Some of the signs are good. We live in a culture of opening up about our feelings everywhere from the psychiatrist’s couch to reality TV, and among the changes is one of the most essential elements of the male experience – having or being a father. “Young dads have trebled the amount of time they spend with their kids compared with a generation ago,” Biddulph says. “That’s a historic shift.”

“The sleazy end of corporate culture like pornography, music videos, the fashion industry and sexualisation of the environment around us is eroding the gains made by feminism towards seeing women as people first,” Biddulph thinks. “In fact boys and men themselves are being seen as objects of lust, something to be used and discarded. It’s an ugly and destructive thing and takes away the whole precious stage of young love, slowly and carefully finding intimacy and trust.

“Kids often feel they have to act out the imagery they’ve seen and worry about how they look or perform instead of really being loving and loved.”

Biddulph also has a unique stance on the mysterious male energy that drives us to do everything from commit murder to play football, and he points out that mens’ combative nature can be a good thing. “Aggression is to do with tackling a problem energetically. Fred Hollows was aggressive in believing we can cure blindness in the third world, Bob Brown is aggressive in saying we need forests for our grandchildren to be able to breathe and drink clean water. There are ways to channel those energies for good.”

And the place to learn such skills, he thinks, is in the rough and tumble of games with men who can teach you the difference. “Men are wired for quick and strong reaction, we had to fight large animals to survive, so boys have to be taught to rein in their physicality to be safe. Play fighting seems to be a way boys learn to be excited and worked up, but how do you draw the line in the midst of that? It’s a vital skill.”

In fact, having men around to teach boys what it means to be one seems to be the most important thing missing. Biddulph believes it takes more than an XY chromosome to make you a man, an even though most dads of today’s toddlers are as prepared to play blocks as work late, the situation’s more urgent than ever. The generation we’re raising now might end up presiding over a world of far fewer resources and opportunities, and caring about others might be more important than any border security we can dream up.

“Fathers, uncles, schoolteachers and active men in the community need to spend thousands of hours with boys,” Biddulph explains. “Masculinity isn’t something you’re born with or that you suddenly get at 18 or 25. It has to be carefully and intensively taught.”

Of course, after relationships, the biggest thing in most mens’ lives is their job. It comes to define and shape us in a way few other aspects of life can, and the best thing blokes can do (as Biddulph said in 1994 and repeats now) is find a job with heart.

“I have a friend who’s very smart,” he recalls, “and he’s been flying between his home in London and various parts of the US for the last 12 months on an intensive project to create a ‘gay beer’ – a beer gay men will want to buy that won’t put off straight men either. I can categorically say the world does not need a gay beer, and there are millions of jobs men do like that – making, selling and persuading people to buy and own things which are useless or worse than useless because it makes a buck.

“Making a buck isn’t good enough. In a world that might tip into centuries of famine and unstoppable global warming at any moment it matters what men do with their time and energy. I think every man has to look at what he does and ask himself if he’s really proud of that. It doesn’t have to be anything grand – you can make sandwiches with pride – but it does have to make sense. Millions of mens’ lives don’t make sense.”