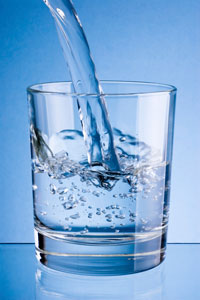 Funny to think something we’re surrounded by is going to be one of the hardest things to come by one day soon.

Climate change, increasing demands on the world’s water by more people, and the gulfs between the economic systems we all live under mean horrific inefficiencies in water distribution and use.

But it’s a local as much as a global issue. Every time we want to water the lawn we feel the pinch. We know it’s something we’ll have to give up eventually unless something’s done — stories of dams and reservoirs at dangerously low levels have been part of life for years now.

Sydney’s Warragamba Dam was virtually full for twenty years before dipping below 50% for the first time in March 1983. The chart shows a shocking decline since the year 2000 — to a new low of 37% in early May this year. Rising populations, thirstier industry (and more of it) and our notoriously sunburnt country are all taking their toll.

We’re on the periphery of water provision; the model of a rich western democracy but always teetering on the brink depending on nature to provide for us on such a hot, dry continent.

It’s also a contentious political issue. Legislators can’t pretend the issue doesn’t exist and shunt it to the next government to worry about, and they know it.

The state-owned Water Corporation that supplies much of Western Australia is keenly aware of dwindling water resources; the level of fresh water coming into the various dams and reservoirs under their control has decreased by two thirds over the last three decades — without even accounting for the increase in demand. The Gallop Labour government has taken a long-sighted approach by committing $350m to a desalination plant south of Perth, but it will only add 17% to the supply base.

How is all this news for investors? Well, the water business is going to be one of the biggest on Earth (if it isn’t already — albeit in a non-profit, government-owned form). US Market Research outfit Mindbranch claims that in 2001, the value of advanced wastewater systems in use globally was $3.5 billion, expected to reach $4.6 billion by 2006. And that’s just wastewater treatment ‘ it doesn’t include collection, distribution or provision. So plenty of operators (both small to massive) are getting in on the action in more areas than just turning on taps.

As an example, the recycling industry is only going to get bigger. Victoria-based CDS Technologies specialises in installing systems that clean stormwater and wastewater by efficiently sifting nasties like leaves and plastic bags from under the water.

Sydney’s AquaReuse believes much of our water wastage comes from not separating supply into what we consume and what ends up down the drain (grey water). Their system recycles water from the washing machine or dishwasher for use in lawn watering or other applications where it doesn’t need to be fit for human consumption.

Water Sciences International (having listed on the ASX in mid May) has a technology for removing Cryptosporidium infections, and fellow Perth-based company Solco offers a range of solar water heating and pumping solutions.

It’s a good thing there are so many feelgood technologies in Australia to invest in, because large scale domestic water supply is still almost completely state owned, any profits going only to government coffers and not private investors.

The situation’s a little different overseas — particularly in the developing world — but if you’re considering it, make sure you back the right scheme. There are a lot of political and commercial agendas many believe overshadow the reason water provision exists in the first place (water provision, rather than the bottom line).

When the Bolivian government sold the water supply in the city of Cochabamba to US speculator Bechtel, prices rose threefold, supply became haphazard, and it took weeks of protest action (and violence) for the government to cave in and kick Bechtel out of the country.

So keep your eyes and ears open; products and services that slow down the ravenous borrowing on our childrens’ future can only be good if their heart’s in the right place, and you can fatten your nest egg as well.